“I was just dive-bombed by a Tern in Feltham!” I said, on my return home the other Sunday morning.

“Did you see my Facebook post?” I looked perplexed.  This wasn’t the response I was expecting following the announcement that I had just seen a rather out of place bird.

“Err no, I was in church” was my hesitant reply.

“Red kite!” said John, “circulating out the back here!”  He duly produced his mobile phone and showed me the photos he had taken earlier in the morning of this extraordinary, and once rare, bird of prey circling over the unlikely territory of Hampton!  The Red Kite has been brought back from near extinction in the UK by a comprehensive breeding programme and is now deemed to be of ‘green’ status by the RSPB.  In fact there is now thought to be around 1600 breeding pairs.

Someone I told this story to wondered how John knew that it was a Red Kite but I pointed out that they are quite distinctive.  Even if you’re not close enough to see the deep, rusty brown of their plumage, their distinctive deeply forked tail makes them stand out from other birds of prey.  (Not that we have that many bird of prey flying over Hampton!)  We are also very used to spotting them driving back along the M40 from Oxfordshire.  The M40 corridor is one of their main nesting areas in the South East and was one of the regions where between 1989 and 1994, birds imported from Spain were encouraged to settle.  Driving through the Chilterns on New Year’s Day I had started counting them as they soared above and along the side of the motorway.  I gave up once I’d gone past fifty!

Interestingly, exactly a week prior to spotting our Hampton Kite, a colleague had seen on

e flying over Cobham, so clearly they are extending their territory in this direction.  Both of these sightings occurred during March which is when breeding birds start to look for potential nesting sites and, generally speaking, they will return to these nests year on year.  Whilst it is extraordinary to think of one of these birds flying over this way, I’m not entirely sure that I fancy having them nesting on my doorstep.  The occasional passing Sparrowhawk is enough to frighten away small birds without the help of a Red Kite as well!

All of this meant that my Tern was quickly forgotten.  I think it was only a Common Tern and, having now looked them up on the RSPB website as well, I have discovered that they are not that uncommon inland in this South East of England as they are rather partial to gravel pits and reservoirs!  A few over winter in the UK but most return during March and April.  The one I saw was with a mixed flock of gulls so I guess that all makes sense.

Being a Common Tern, I also felt more kindly disposed towards it.  I have unpleasant memories of being dive-bombed by Arctic Terns in Iceland which, I can assure you, is not a nice experience!  Although on the basis of all things being relative, it wasn’t as unpleasant as being dive-bombed by a Skua which is a particularly painful experience!  If you have ever stepped anywhere near the nest of a Skua you will know exactly what I mean.  They just fly directly at your head with their sharp, pointy beaks and they are quite large birds!  We have learnt to avoid Skuas wherever possible but the attack by the Arctic Terns a few years’ back took us by surprise.  All we wanted was a scenic photograph but a step too far onto a shoreline caused them to rise up from their nests, squawking loudly and soaring towards our heads!

Whilst it’s lovely to see an unusual bird in the locality, I have to say that I get more pleasure looking outside the back door at the regular visitors, especially those returning for the Spring.  This week the lawn has been covered in Starlings and yet we’ve hardly seen one all winter.  There is something deep down in our grass that they are clearly enjoying at the moment as they are working their way methodically across the ground, pecking constantly.  We also have a pair of squabbling / courting Robins and I thought I heard a trilling Chaffinch the other day, confirming that we are now well into Spring and Summer is only around the corner.

When it comes to the garden, I prefer my surprises to be good ones rather than bad ones!  Call me fussy, but I prefer to discover that a treasured plant has reappeared rather than that the slugs have eaten my newly germinated radish!  The last few weeks have c

First up were the creamy yellow scented narcissi.  Stupidly I had dumped the pot they were planted in around the back of the shed next to the pot washing pile.  I ignored it all winter (pot washing being a warm summer’s day activity in my book) assuming that I would just clear it out in the Spring.  However to my delight, in February it produced some of my favourite Iris Reticulata!  These delicate, deeply coloured flowers are so rewarding to see on a cold day when Spring still feels some weeks away.

Then, to my amazement, this pot threw up a further surprise when it revealed the scented narcissi.  These happy multi-headed stems seem to dance around in the sunshine and their perfume wafts around in the breeze.  Behind them I can see tulips emerging so clearly this must have been a ‘bulb lasagne’.  Someone remind me to label it so that I don’t make the same mistake again next year! 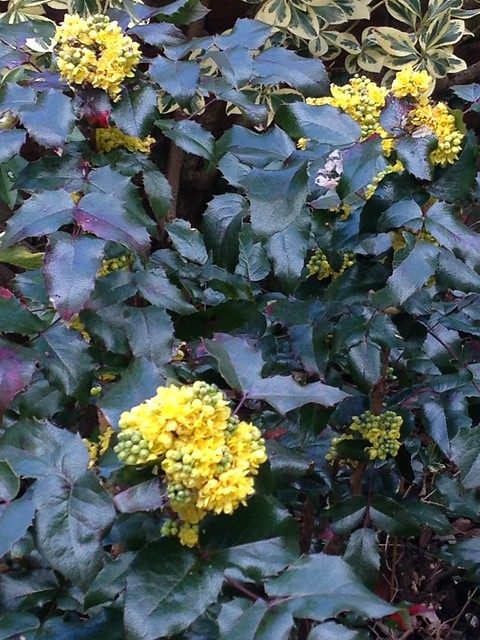 arden.  This is one of those plants that has always been there and, to be honest, we’ve paid very little attention to it.  Every year it’s produced a few prickly leaves and the odd bit of flower but last year, for the first time, we suddenly had a mass of yellow and this Spring has been a repeat performance.  Sadly it seems to be a rather bog standard form of this shrub and does not exude the wonderous scent that is promised in the descriptions of more genteel varieties advertised for sale.  However, what it lacks in scent, it is currently making up for in vibrant yellow spikes and I, for one, am very happy for it to continue doing this year on year!

And finally, this is a surprise that I can’t decide whether falls into the good category or 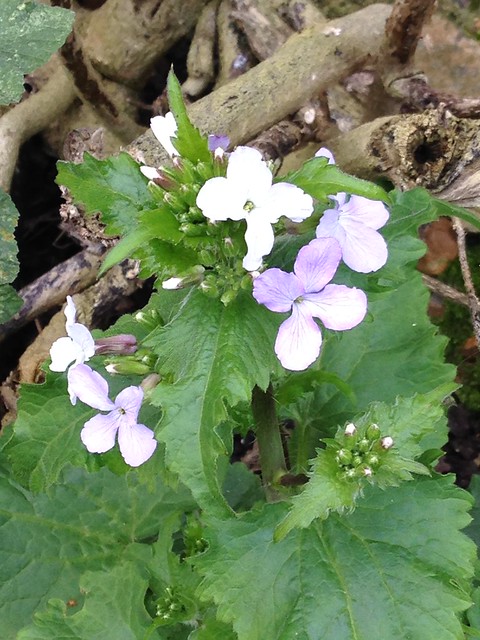 not.  Some years’ ago John fell for the purple and white Honesty that was flowering freely in the garden of a holiday rental house in the Netherlands.  He collected some seedpods and brought them home.  Subsequently I have thought that this was probably illegal – but hey ho!  Honesty is a bienniel so only flowers every other year.  We sowed the seed and then had a very long wait but, sure enough, we were rewarded with banks of purple and white flowers two years’ later.  We have now managed to juggle the cycle so we do have some Honesty in flower each year but this Spring does look like being a bumper year, particularly for the white variety.  However, there’s a new kid on the block – a pale lilac coloured flower!  There’s only a couple of them so far but we’re wondering whether we’re onto something new!

Some might see gardening as a solitary activity but I think gardening is about sharing – sharing knowledge, seeds and plants, and thinking about sharing plants brought a poignant moment one Sunday in early March when the death of a former parishioner was announced at my church.  Although the lady concerned had moved away from the area some time ago to be nearer her family, she had previously been a St Stephen’s regular, in particular at the Wednesday morning service. However, for me she will always be inextricably linked with the pulmonaria that grows in our garden.

Many years’ ago, I am assuming as a result on a Wednesday morning conversation, she gave my Mum a clump of pulmonaria. Subsequently, when we moved here and were desperately trying to fill gaps having just acquired a garden about ten times the size of our previous garden (our previous garden being of postage stamp size), Mum divided some of this pulmonaria and brought some over for me to plant. Since then it has thrived, self-seeding itself generously around the place, occasionally too generously so I have to keep an eye out for when the flowerheads have died back and are about to shed their seed everywhere and dive in to remove the rather hairy stems and seedpods. A few new plants every so often is fine but, given half a chance pulmonaria would probably take over the place every spring.

The type of pulmonaria I’m referring to here is Pulmonaria Officinalis, otherwise known as Common Lungwort. Having looked it up on the RHS website, I am astonished to see just how many alternative names there are for it, many with biblical origins including Jerusalem Sage, Adam and Eve, Jerusalem cowslip, Mary’s honeysuckle, Mary’s tears and Sage of Bethlehem.

Pulmonaria is happy in shady, moist spots and is one of those plants that announces that spring is just around the corner when the first flowers begin to emerge. Unusually the flowers open one colour and turn another, starting off pink and ending up blue, which usually means that you have flowers of both colours on the plant at any one time.  They are loved by early bees who attempt to bury themselves in the tiny bell shaped flowers.  They also produce huge green leaves with white spots which, centuries ago, were thought to symbolise spots on the lung and the leaves were then used to treat chest infections, hence the name ‘lungwort’.  They are similar to that other wonderful spring plant, the hellebore, in that they produce their flowers first and their leaves later.

Last year I did try venturing beyond Officinalis and bought myself  the more sophisticated ‘Sissinghurst White’ but sadly a combination of foxes digging them up and a sudden dry spell meant that they failed to survive. They were incredibly tiny plants when they arrived so I wouldn’t mind having another go with this but next time I think I’d want to start out with a single, bigger specimen that had more chance of survival. There are also totally blue varieties (such as Blue Ensign) or totally red ones (Bowles red), although strictly speaking they are more pink / coral than red.

Returning to the theme of sharing, there are many opportunities for doing this.  If you have more than you need of something in the garden, why not offer a clump to friends or neighbours?  On the other hand, if you’d like to take advantage of other gardeners’ generosity, you could join a seed swap.  ‘Seed swap Sunday’ in early February is gaining in popularity.  Too late for this year, but perhaps put a note on the calendar to investigate this next year?  Equally if you are member of the RHS, you can apply to receive seeds from their gardens each Spring.  With summer approaching, it will soon be time to start looking out for the NGS Open Gardens where there are usually plants to be bought too.  So whatever you do, don’t make gardening a solitary past-time.