Peas are one of our favourite vegetables and one of the key pieces of advice I read before starting to grow veg was to make sure that you grow what you like.  It may sound obvious but it’s very easy to be seduced by the sight of regal purple beetroot adorning the veg plot when in fact you only eat it about once a year.  So peas were always near the top of my list of veg that I wanted to grow.

The first challenge was to get my head around varieties.  Delve into any seed catalogue and there’s probably more than a dozen to choose from.  Some names make it easier than others.  Feltham First, for instance, gives a pretty good clue that it’s going to crop early in the season.  However, when you’re first starting out, you’re not even sure whether you want an early or a mid-season crop.  As luck would have it, I read an article in Gardeners’ World Magazine that was actually about creating a one-foot veg plot, a method whereby you divide your plot into foot squares and grow a different crop in each.  Our original veg plot wasn’t very big so the advice in this article seemed ideal and so I sought the varieties of veg it recommended.  As a result, we have grown Hurst Green Shaft peas for over ten years now.

One thing I have learnt is that you need to sow far more peas than you possibly think that you need if you’re to have a decent crop.  I began sowing them directly at the foot of the stakes but germination was poor, probably down to the mice eating them!  I then decided to try growing in large pots and this produced a much better crop but the downside was that all the plants would crop at the same time and that was usually the week we went on holiday!  So I decided to return to growing peas in the plot but I needed to improve my succession sowing and achieve a bigger overall crop.  I took the approach that I was already doing with beans which was to sow four seeds into four pots every three weeks from the end of March.  Generally this meant that as one set were transplanted into the plot, then the next set were sown.  This worked fine  but still produced a relatively mean meal but now the mean meal was on three occasions rather than just one!

This year I was determined to crack it!  We would have enough peas per set to produce some of our favourite recipes from just our own stock.  So instead of sowing four pots at the start of the season four became eight and hurrah, it has worked!  Last month we were able to make Ursula Ferrigno’s wonderful Pasta with Peas from all our own pods!  And in early July we followed this with Jamie Oliver’s Pea and Broad Bean salad.  Both of which are recipes which I love eating outside on a warm summer’s evening.  The latter has pancetta in it but the veggies amongst you could probably leave that out and still have a tasty dish.  Leave a comment here if you’d like the recipes!

How lucky were we to find ourselves visiting the Hampton Court Flower Show on a perfect summer’s day in a year when there have been so few!  With nearly 40 show gardens to view, not to mention the Floral Marquee and Festival of Roses, Hampton Court certainly lives up to its claim to be the largest flower show in the world and the prospect, at the start of the day, is quite daunting.

With 7 different categories of garden, I confess to finding myself a little confused a times.  It wasn’t easy, for example, to see what made the Perennial garden a ‘Water’ garden
rather than a ‘Show’ garden or even ‘City’ garden.  This particular photograph doesn’t 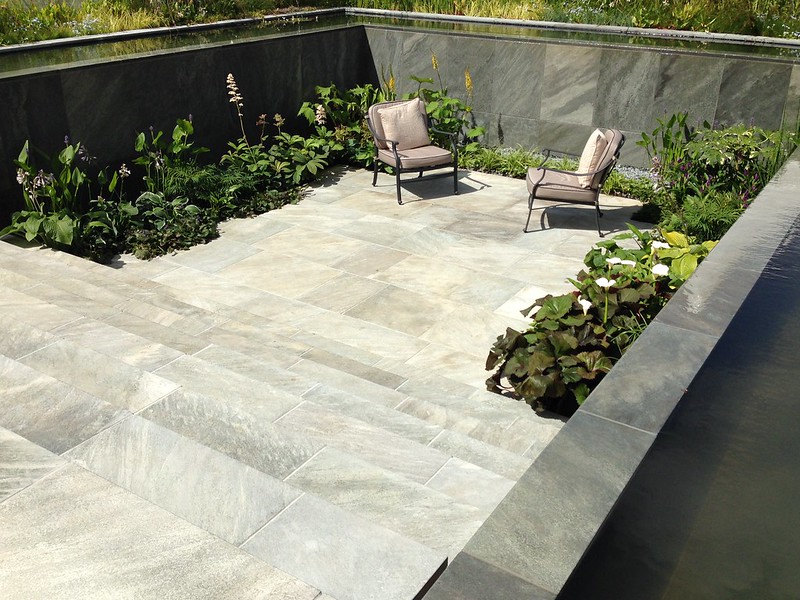 really do it justice as the water running around the edges and over the silvery grey stone created a very cooling effect.  This garden also amused me as it didn’t look anything like its sketch in the show guide.  Not being an expert, I can only assume that it did broadly meet its brief even if the general layout turned out somewhat different!  Of course this may also explain why it scored a Silver medal rather than anything higher.

On the BBC TV coverage, Monty Don and Joe 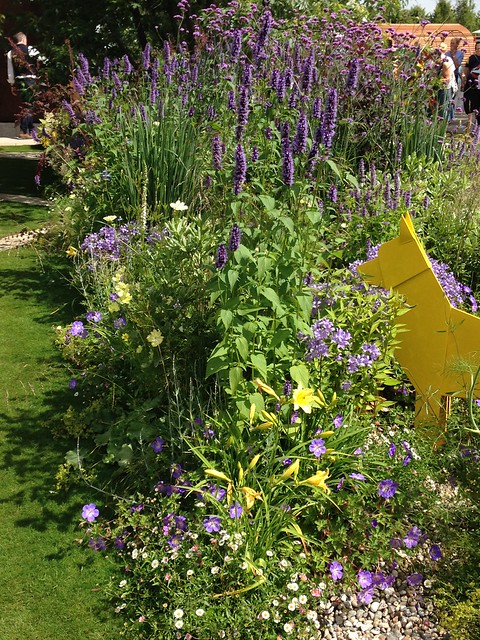 Swift were criticising some of the designers of various charity sponsored gardens for trying too hard in getting their message across.  I’m not sure whether they would include the Dogs Trust in this but it was by far our favourite garden.  Created with an immense sense of fun, the planting was also beautiful (my favourite purple with hints of yellow and cream) but I couldn’t help feel that the calming water feature would have been anything but calm if you had a real dog romping around in it!  The spaniel owning lady standing next to me clearly agreed.  Interestingly the Dogs Trust representative said that they are incorporating water features into all of their centres as the dogs love it so much – I bet they do!

Of the smaller gardens, another favourite of ours was the Sussex garden created by Wil

Williams, a young designer who is also part of the RHS apprenticeship scheme.  This scored a Silver medal in the City gardens category and featured familiar Sussex knapped flint along with, yes you’ve guessed it, more purple flowers!  In this case Salvias alongside Foxgloves and the unique ‘Pride of Sussex’ wildflower which is only found on the South Downs.

The Conceptual Gardens are unique to Hampton Court and I enjoyed the range of styles along with the intellectual challenges they posed.  They also provide a refreshing contrast 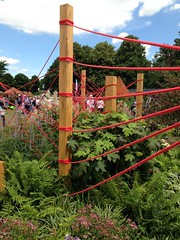 to the other show gardens.  There is only so much beautiful herbaceous planting you can take in one day and so to emerge from the tightly packed Summer gardens into the wide open field sporting the green turf pyramid of the Wormhole was refreshing.  I will, however, confess to almost walking past Greenhouse Effect, a garden that featured four greenhouses in a row (which made it rather look like a sales exhibit), each of which symbolised an effect of climate change.  J’s favourite Conceptual garden was the Red Thread, a garden based on a Chinese belief that you are connected to everyone you encounter in life by a thread.  I’m not sure that I have an overall favourite but the UNHCR Border Control garden was certainly moving with its exterior rugged planting contrasting with its interior softer flowers.  The guide pointed me towards a life jacket and a teddy bear strewn next to the barbed wire fence and told me that these had been found on the shores of Lesbos in Greece within the last few weeks. 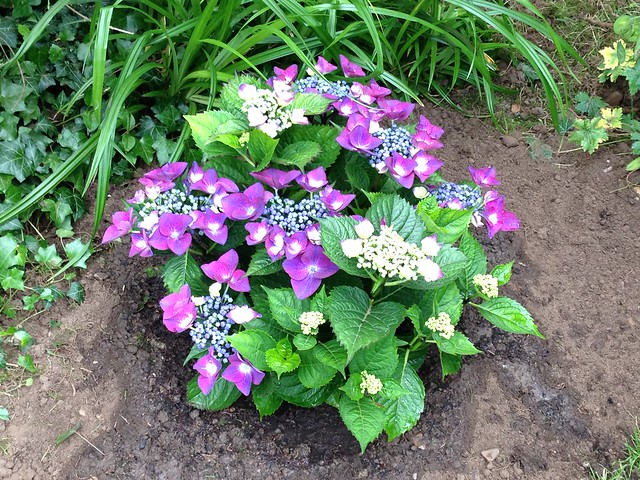 But this blog isn’t about reviewing a flower show, it’s about what happens outside the backdoor.  Of course one of the attractions of Hampton Court as compared to, for example Chelsea, is that you can purchase plants on the spot.  We were very good until we entered the Floral Marquee where I just happened to conclude my long term search for the right hydrangea to go in a dark, damp corner.  I’m not a great fan of hydrangeas and so I’ve dithered a great deal over this but the winning combination of blue buds that evolve into cream flowers that deepen to dark purple meant that Kardinal Violet made its way home with us!  We also added a white agapanthus to our collection, a creamy white thalictrum and a stunning little coreopsis ‘ladybird’ which promises to add some late summer zing to the border with its deep red / orange flowers.  If only this gale would now stop blowing so that they could all settle their roots in and make themselves at home.