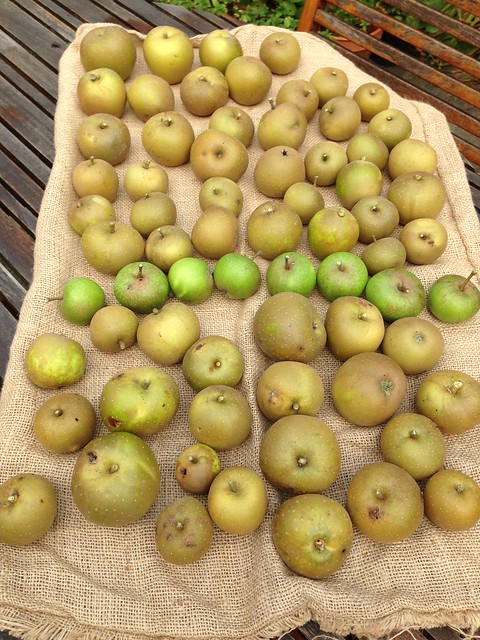 away.  This year we’ve had a good crop on both our trees, the russet and the pippin of sorts (we just don’t know which variety of pippin).  However, they are always prone to brown rot, that horrible disease that just causes the fruit to gradually turn brown and decay into a horrible pulp.  It’s always really annoying when you go to pick a fruit that looks fantastic on one side, only to discover that it is brown on the opposite!

I used to think that brown rot was just something that happened with the age of apples, or other soft fruit for that matter, but it is actually a fungal disease that is airborne and which targets any small damaged area of the fruit.  This can be a peck from a bird or a burrowing insect.  We’re not very good at looking after our fruit trees really.  We do set a coddling moth trap each year but that’s about it.  Apparently, to prevent brown rot spreading, we should be removing any fruit with patches of brown as soon as we see them and burning affected spurs, the bit of the branch that bears the fruit.  In reality, I can’t see us actually doing this, so how do we get the best out of our fruit in other ways? 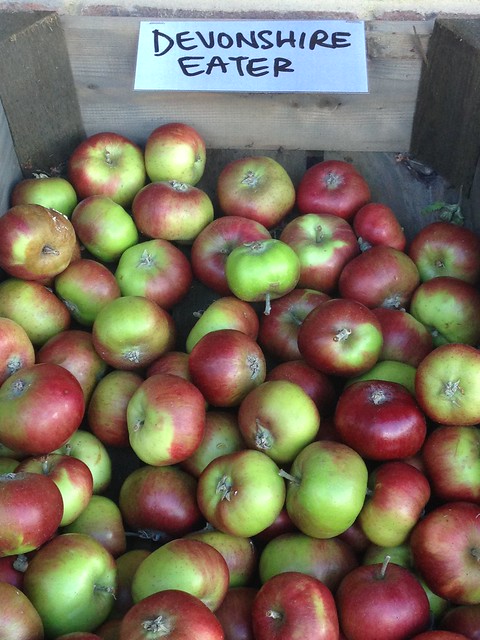 This year John decided to pick all the fruit as soon as a few reached a decent size.  We were inspired by a visit to Wisley where they were selling their own apples as ‘small’ or ‘large’ and the small ones were really quite tiny.  So we decided that small and edible was better than risking bigger but semi-rotten.  Having picked all the fruit, John sorted them out on the garden table into three categories – perfect fruits (a relatively small number), small signs of rot but potentially rescue’able, and finally those pretty much a lost cause.

That lunchtime we began with some lost causes, cutting off the small slices of apple that looked edible but, crikey, they were sharp!!  It took a few hours for the roof of my mouth to recover!  Then inspiration struck.  John decided that what we needed was a blackberry and apple pie … with lots of sugar!  Having spotted some blackberries down the far end of the garden, he grabbed the stepladder and went on an expedition.  He returned about ten minutes later with a very small handful of berries.  This pie was clearly going to be a little challenged in the blackberry stakes!  So, given that we have had very prolific raspberries this summer, I suggested picking some of those and throwing them into the pot too.  This worked and we soon had that marvellous smell of autumnal fruits pervading the house.  What, of course, we should have asked ourselves first was whether we actually had any pastry in stock to make a pie or for, or for that matter, any ingredients for making the real thing.  It’s a long time since I made actual shortcrust pastry but I suspect I could probably still do it at a push.  As it turned out, there was half a pack of pastry lurking in the bottom of the freezer so this was duly defrosted and eventually teased out enough to make a pie which John decided to christen ‘Outside the back door pie’!  It was really very tasty and much more enjoyable than suffering the sharp apples.

We wrapped the rest of the good apples in little newspaper sleeves and popped them into a storage tray and wedged it into the cupboard under the stairs.  John has been checking on a regular basis and a few more apples have continued to rot so we’re probably heading for another pie this weekend!  I do hope that we eventually get to eat some as just straight forward eating apples.  Hopefully a few more weeks maturing under the stairs will make them a little more palatable!