Traditionally October is the month for Harvest Festival services and yet, in our current climate and ways of farming, the harvest is often long gone and put away even by the start of September.  For me September is the beginning of autumn although this year, it was the end of July when I first walked out the front door one morning on the way to work and thought it felt different.  There’s a sense of coolness in the air and a smell that’s hard to describe but it says that the height of summer is already past and soon the morning ground will be thick with dew.  By thinking of 1st September being the start of Autumn, I’ve read that this means I’m following the meteorological calendar as against the astronomical calendar which would mean that Autumn didn’t get underway until later in the month on the 22nd.  Either way, now is certainly a good time to take stock of the harvest that the garden has produced this year.

Back in May I wrote about our increased interest in growing fruit and this summer we have really reaped the benefits of this.  In June our strawberry plants went mad!  In May, wonderful clusters of white flowers burst through thick bushy green leaves and I watched nervously as the fruits began to form. 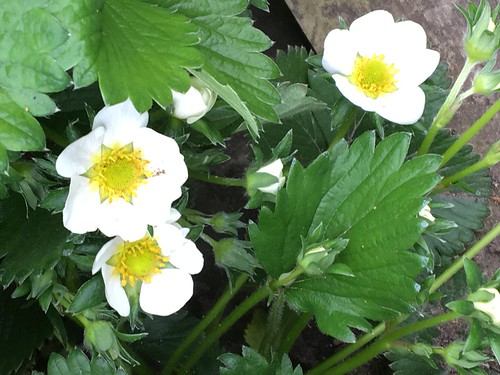 Unexpectedly cold nights worried me.  On Gardeners’ World, Monty Don warned that if the centre of the fruits turned black, that meant they had been damaged by the cold.  I sighed with relief as ours remained a healthy yellow but I began to worry again as May turned into June and our summer holiday approached.  Were these fruits all going to ripen as we crossed the Channel?  And if so, who was going to be eating them?  Certainly not us!  As it turned out, luck was on our side and about a fortnight before our departure a few fruits began to turn red.  We started out being thrilled by picking one or two fruits to eat each evening but soon this became ten or twenty fruits – complete bowls full!  Gardeners often proudly declare how many pounds of fruit their plot has produced but we were too busy enjoying the fruit to bother counting.  As our portions of fruit became larger and larger, eventually I had to draw the line.  Faced with masses of strawberries the evening before our holiday departure, I declared that it was too much and suggested that we take a punnet with us to eat en route into the Netherlands.  So it was that, on midsummer’s day, we found ourselves sitting in the lay-by of a service station in Belgium eating home-grown strawberries whilst watching a flock of sparrows taking dust baths! 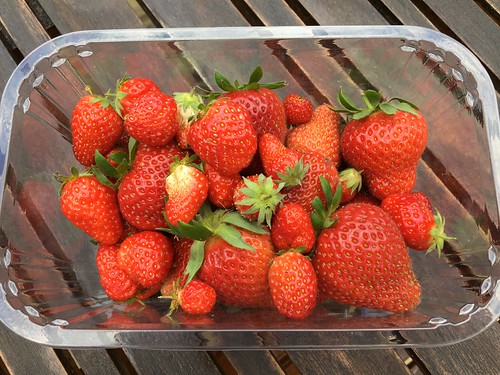 Our raspberries have also been very productive.  In fact John was heard to say recently that we may yet be exploring recipes for raspberry jam in future years.  Yet again the scale of the harvest crept up on us, from tentatively picking the first few ripe fruits to suddenly realising that we had several punnet’s worth sitting in the fridge. 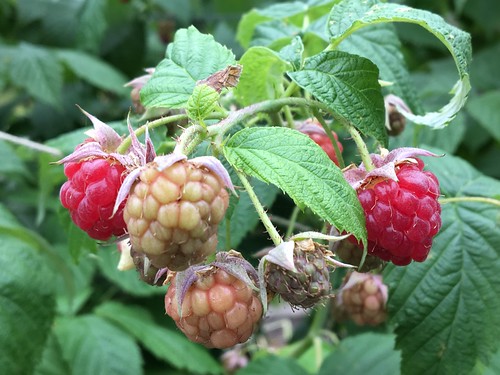 The blackbirds have also been enjoying our raspberries and our blueberries for that matter!  My defence of sparkly Christmas wrapping tape tied to branches and supports has not been overly successful in deterring our determined feathered friends.  Raspberries have been plentiful enough for us to feel generous towards the birds but their plundering of our blueberries has been less endearing.  We strongly suspect that they have eaten more than us!

Back in July the cherry plum tree was also laden with fruit which was ripening considerably faster than I was expecting.  I have jam jars clearly labelled with ‘cherry plum jam’ and dated 19th August.  This year’s crop was ready by 19th July!  The very hot spell of weather in June and early July clearly had an effect.  Not only were our cherry plums ripening rapidly but a colleague had apricots coming out of his ears! 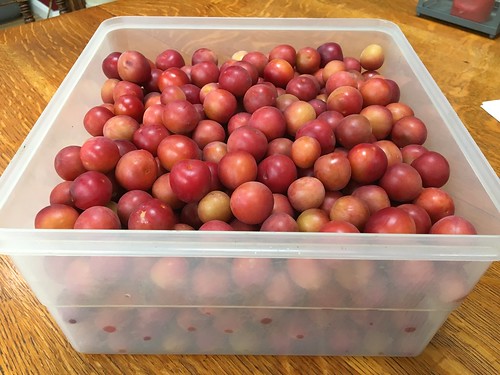 One of the most rewarding sights of the harvest, however, has been our mirabelle tree.  We planted our Mirabelle de Nancy about four years ago but it is a tree that has had its challenges.  We fell in love with the mirabelle fruit during holidays to Alsace.  In September we would pass stalls selling brown paper bags full of mirabelle, a fruit that we had never seen on sale in the UK.  Having investigated trees, we finally established the variety, ordered one and planted it with great attention to detail.  However, it has been subject to leaf-curl which causes die-back in the branches, and also to fruit withering before maturity.  As a result, we have had about two mirabelle in total that have ever tasted remotely like what we had hoped for.  This year may well be different.  At lunchtime today, we had four mirabelle with yellow skins beautifully blushed with rosy pink that indicated these were perfectly ripe fruit and they were absolutely delicious!  We’re a long way from having enough to make mirabelle tarts or mirabelle jam but we are definitely heading in the right direction. 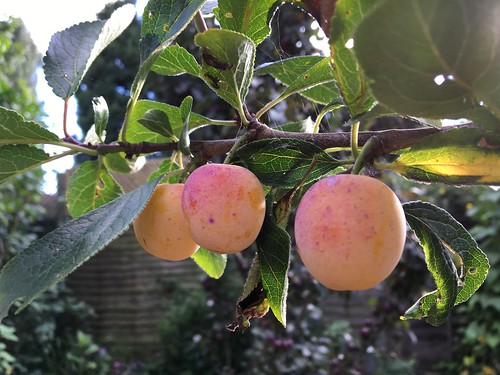 Soon it will be time to get the jam pan on the boil again and this time for crab apple jelly.  Our tree, Laura (that’s the variety and not a nick-name), is laden.  The wonderfully dark beetroot coloured fruits appear to be swelling day by day, presumably due to the rather extreme amounts of rain that have descended during August.  Like everything else, it looks like being an early harvest!

A month ago, if you’d said to me that I’d be struggling to garden due to the rain, I’d have laughed out loud!  Whilst I would be the first to admit that we desperately needed the rain, I am forced to admit that the weather has not been very typical of July and, as a result, my timing when it comes to getting things done in the garden has been absolutely rubbish!

On one occasion I chose a particularly bad moment to attempt to plant a rather beautiful salvia given to me by a friend the previous weekend.  Dark purple with striking silvery leaves, this salvia is a plant that shouts ‘summer’.

Having decided on a location, I started preparing the hole.  Admittedly the sky was very overcast but it didn’t look full of the deluge that descended just as I was positioning the plant in the hole!

On another occasion I was forced to take shelter in the greenhouse.  Fortunately I’d just grabbed the tomato food so was able to use my time wisely whilst trapped and emerged having both fed the plants and tied in any wayward shoots.

Trying to decide when to administer liquid feed to various pots and plants in the border has also been challenging.  The pots look quite sodden whereas less than a month ago we were ensuring they all had trays underneath them to capture every valuable drop of moisture.  Now I’m trying to rescue plants from drowning!  Just because a pot is wet, doesn’t mean it doesn’t need feeding, especially as heavy rain like this is liable to wash out any nutrients from the pot.  So I decided to splash around a few cans of liquid seaweed just as the rain began again!  There’s no doubt that you do feel a bit daft watering in the rain!

And then there’s been my misplaced optimism about entertaining outdoors.  Last July we spent a glorious evening entertaining friends out on the patio surrounded by plants and lanterns.  Wouldn’t it be lovely to do it all again this summer?  Sadly the weather has had other ideas.  For a start, a gale force wind blew out all my candles and lanterns and, whilst it wasn’t exactly cold, it wasn’t what you would call a warm, balmy evening either!  Best laid plans eh!