At first I wasn’t even sure that I had actually seen it, it was so tiny.  I was gardening at the far end of the garden when I was aware that something very small indeed had flown past me.  It reminded me of the occasion, possibly as much as ten years’ ago, when John had come back from that end of the garden talking excitedly about this tiny bird he had seen with a bright yellow flash on its head.  At that time we had to delve into a bird book in order to identify it – a goldcrest, Britain’s smallest bird!

Since then, goldcrests have had a little more publicity on programmes such as SpringWatch, or maybe I’ve just become more aware of them through reading magazines from the RSPB.  When I say they are small, I really do mean it.  At just 9cm in length, they weigh a mere 6g!  Yes, you read that correctly, not much more than a teaspoon of sugar!  Apparently they do breed right across the country but you are far more likely to find them in coniferous woodlands or parks with large, mature trees, than you are in gardens in Greater London.

So had I seen a goldcrest?  I just had an instinctive feeling that I had.  Then, later the same day, I spotted a tiny bird literally hanging around our birch tree.  It looked smaller than a bluetit and, when I say ‘hanging around’, it was doing just that but its mannerisms were different to the bluetit which we see most days.  I grabbed the binoculars and discovered just how difficult it is to home in on something so small!  However, for once the bird cooperated and didn’t immediately fly off, and I was able to home in on it and, to my delight, to see the bright yellow streak on its head – definitely a goldcrest!  It hopped around a bit more before coming a little closer into the camellia.  I’m also delighted to say that it’s been back.  I’m sure I saw it later the same week and then one evening this week it hopped around our hawthorn tree.  Needless to say we didn’t have a camera to hand, hence the Wikimedia photo above!  Having said that, the bird is so tiny that our chances of getting a good picture through the lounge window are probably slight!  It would be fantastic if this little bird became a regular visitor so I have my fingers crossed that it’s not scared off by the boisterous parakeets or, worse still, predated by the ever-present crows, magpies and our local jay.

On the same evening that I spotted the goldcrest, John was heading out into the garden to add some kitchen waste to the compost heap when he stopped in his tracks.  “Heron!”, was all he said.  Ah, that time of year.  The frogs were back to lay their spawn in mid-March and since then we have been aware of the heron circling the garden more frequently.  There’s nothing a heron likes better than a few frogs for breakfast, lunch or tea!  This particular heron was stationery, poised to pounce.  When we built our pond, we invested in a pair of very stylised heron sculptures which are quite a feature next to the pond.  Bizarrely, this real-life heron was mimicking the same stance, making it look as if we had three in a row rather than two!

I can always remember the first time I came down to breakfast and saw a heron by the pond.  I honestly thought someone had played a joke and put a plastic one in place!  Why and who, I have no idea why my mind thought this rather than the more obvious thought that this bird had spotted our new garden feature!  Measuring nearly a metre in length and weighing in at between 1.5 and 2 kilograms, nothing could be further from the goldcrest in terms of size!  However, there are a similar number in the country – 60,000 goldcrests compared to around 63,000 heron, but unlike the goldcrest, herons have always liked London.  When we used to work near the Thames in Isleworth, there was a heronry opposite and John could often count five or six in a line up along the river bank.  If you visit Regent’s Park, heron are usually found up in the trees!  To me they remain a creature from a by-gone era and we often joke, “Pterodactyl overhead!” when we see one!

I can never quite decide whether the heron is a welcome garden visitor.  Our next door neighbour thinks not, but then his ponds have goldfish in them!  The heron will perch on our fence eyeing them up and then the poor things hide at the bottom of the pond for days, too scared to even come up for their food.  When the house whose garden runs parallel to the end of ours decided to install a series of raised ponds to house koi-carp, we were most entertained by the heron sitting on the roof our their house thinking that all its Christmases had come at once!  In terms of our pond, it’s the frogs and newts that they like.  Sadly many a poor frog has returned to the place of his birth and to his mate only to become heron breakfast!  I find it fascinating to watch the heron stalking, poised and statuesque, but when they jab down to catch their prey, I’m always convinced that they are going to pierce the pond liner and then where would we be?

Garden designers often talk about the ‘borrowed landscape’. When you live in the suburbia this is a very posh way of referring to what you can see over next door’s fence! I’ve always thought that we are very lucky with our borrowed landscape, living as we do next to another gardener and also looking across the railway line, giving us an uninterrupted view of the classic line of poplar trees. In the Spring we benefit from a wave of blossom as each neighbours’ tree comes into flower, usually starting with the vanilla cream coloured flowers of some self-set plum trees. From there we usually move into our cherry plum blossom, followed by a series of flowering cherries, from the palest pink to deep cerise, and then we move into the white of hawthorn and eventually the apple blossom. When I look out across this from our study up in the loft extension, I think how incredibly lucky we are to have this view in London.

However, this year will be a little different as our garden won’t be contributing much to this display, making us value our neighbours’ trees more than usual. The combination of our loss of cherry tree (see Loss of a Flowering Friend) and our giant tree prune back in the autumn meant that, not only are we lacking pink froth, but also the white cloud of our cherry plum is somewhat diminished and I don’t expect a huge show from our hawthorn either, certainly nothing like last year!

Still, our neighbours are very generous in sharing their display of blossom. On what has been a very rare morning of blue skies and sunshine so far this year, our neighbour’s Magnolia was starting to gear up to what will undoubtedly be an amazing display of waxy tulip flowers, and this from a tree that was pruned quite substantially only two years’ ago. It’s a bit sad to see a little browning and wrinkling on the fresh petals, presumably a result of the harsh March snow and frost? 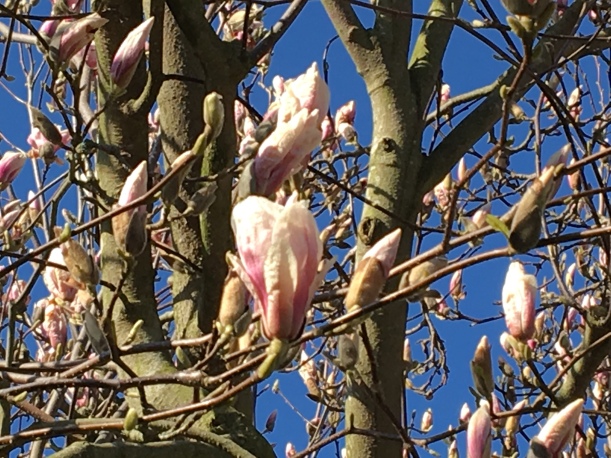 My parents had a huge Magnolia in their garden but I hadn’t appreciated the mess they can make. Whilst it delivers on beauty, the Magnolia also delivers a heap of clearing up starting with the shedding of the outer flower skin in spring, then its petals, followed by its seed pods in autumn and then finally its leaves as we move into winter! That’s four lots of raking up to do!

Glancing across to the other side of the garden, our neighbours there have two delightful cherry trees. A deep pink one which is just budding up and a paler pink which is currently covered in hanging clusters of blossom.

This delicate tree flowers its socks off each year despite it also being used as a swing by the children!

Sometimes we borrow more than just blossom from our neighbours. On one side of the garden we have a pink lavaterra which our neighbour had found too big and had tried to remove. The plant was having none of it and decided it would try its luck by turning in the opposite direction and emerging from under our fence! Our neighbours on the other side have generously granted us access to that very spring-like shrub, Kerria Japonica (possibly Pleniflora), which has worked its way under the fence and now also blooms well in our garden!

It’s so much nicer to be accidentally sharing plants outside the backdoor than weeds!