So it’s already twelfth night and the greenery and berries from last year’s gardening season are heading out to the recycling bin.

I couldn’t help but notice over Christmas that there was a lot of looking back going on and, in our gardens, a lot of focus on things still in flower. So when do we draw the line under the last gardening year and step forward into the next? Over the Christmas and New Year break, I took a stroll around the garden and was very much struck by the amount of new growth. It’s been a relatively mild winter so far here in south-west London and so many plants and bulbs are starting to reach out into the new year.

One of the biggest surprises I had was this violet coming into bud. My original clump of violets was given to me barely two years ago but they seem to have settled in well. I divided up them up on receipt into three different plants and each is now filling out. These are planted in the shade of our cherry plum tree and an increasingly giant self-sown sycamore on Railtrack land (therein lies a challenge!) which is providing them with a naturalistic woodland setting which they clearly love.

I turned around from struggling to take close up photos of the violet and spotted this white cyclamen unfurling itself. I think this particular plant began its life in a winter patio pot and was then planted out. It’s in a rather dark corner of the ‘woodland’ area which appears to suit it. Look carefully and you can see more buds emerging. The leaves also seem to be especially good this winter.

Camellia buds are emerging confidently. I was worried that last summer’s drought would severely affect these as the general advice is that camellias need plenty of water in early autumn to enable their buds to form and whilst the drought had ended by then, it was quite some time before the ground could really be considered as wet. However all three of my camellias are currently promising a good display, as are others up the road, so fingers crossed that they don’t end up a mushy brown mess courtesy of heavy frosts!

I’m not sure that I’ve ever really taken notice of our Portuguese laurel when it’s at this early pink stage of budding. Now here’s a plant that probably needs to bit of curtailing at some point during the coming year!

The cabbage centres of the Euphorbia seem to be forming well. This is plain, standard ‘woodland spurge’, nothing special but I do still enjoy the vibrant lime green bracts when they emerge. They are usually interspersed by daffodils, which are starting to poke their heads above ground but were really too low to make a sensible photo. My large headed daffodils have been disappointing in recent years with the buds often nibbled by creatures in the soil before coming into bloom. I’m keeping my fingers crossed for better things in 2019.

I’m also wondering why there seem to be just four crocuses appearing here?! Given that I specifically planted more back in the autumn, I’m wondering where they have gone? Has a squirrel relocated them by chance?

Of course it’s not all about skipping forward a season to brighter spring days, some plants are in their element now. The great advantage of the holiday season being the chance to see the garden in daylight other than just at the weekend. This winter flowering jasmine has been providing a splendid backdrop to gold baubles throughout Christmas. It’s vibrancy has also lit up some rather gloomy, cloudy days.

Like the jasmine, the winter flowering honeysuckle (Lonicera fragrantissima) is planted near the house. The jasmine gives us a bright welcome each morning whilst the honeysuckle scents the patio and will even waft into the house on a relatively mild day. The honeysuckle is also loved by winter bees and we’ve observed several over the holiday.

But the current star of the garden has to be our Viburnum Bodnantense (Charles Lamont) which is flowering its socks off in a fashion rarely seen before. For some reason I do associate pink blossom with the height of Spring so this shrub really does feel like it’s heralding the new year and soon it will be time to start some real gardening for 2019, the bit we all love, some sowing and planting!

Today I planted the last set of bulbs ready for next Spring and breathed a sigh of relief.  I love Spring bulbs like the next gardener but planting them just isn’t my favourite task. 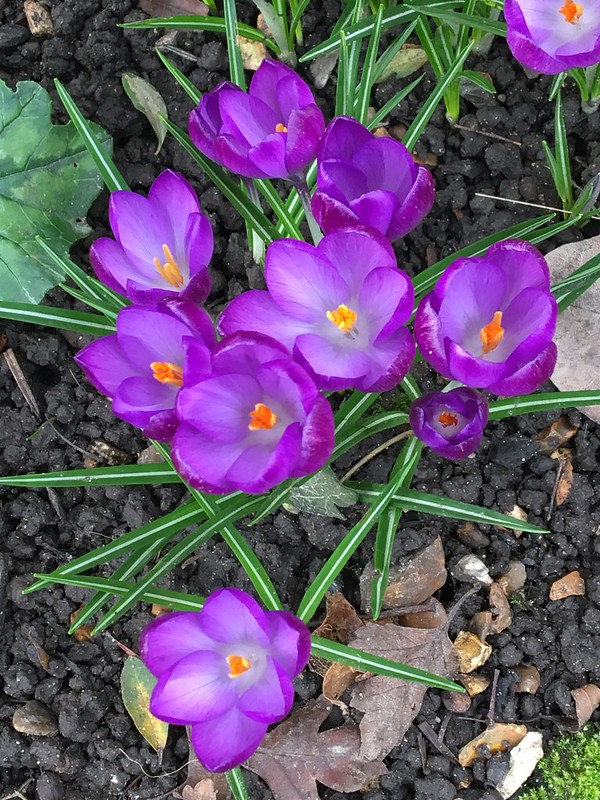 I only realised this some years ago when I was dutifully scrabbling around in the dry earth of September desperately trying to force into the ground some 200 bulbs that I had succumbed to in a rash moment when reading a ‘free’ offer in a magazine.  My next door neighbour called round and remarked that he disliked bulbs because planting them was hard work and boring.  I remember pausing at that moment and thinking, he’s right!

Early September brings the best bulbs into the garden centres but the ground is either too hard and dry to plant them or covered in late summer flowering gems.  And then there’s the dilemma about tulips.  All the advice points to planting them in November to reduce the potential for disease but if you leave purchasing your tulips until then, you will have very slim pickings in the garden centre which by this time will be full of Christmas decorations!  Store your tulip bulbs carefully and, by the time you are ready to plant them, chances are they will already be sprouting or some will have gone soft! 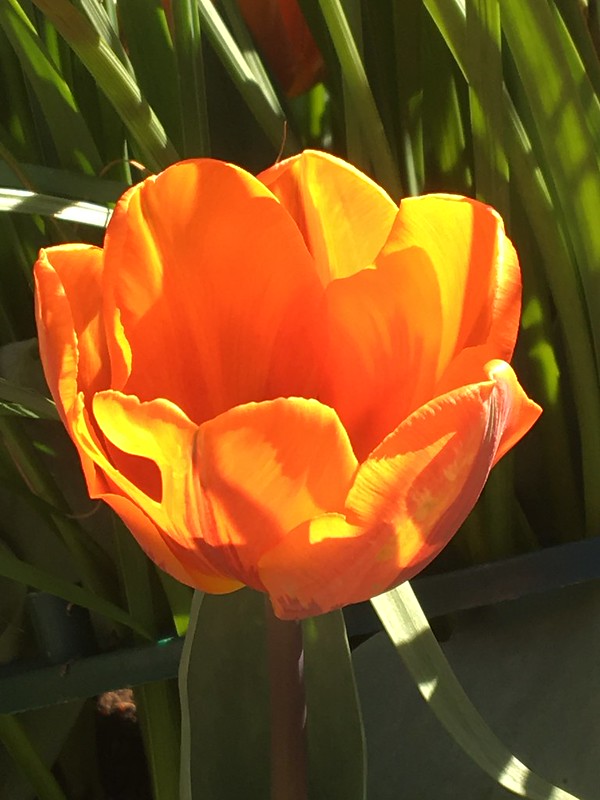 This autumn I wanted to plant yellows, oranges and reds in my ‘hot’ border but held off until last weekend as it was, to my delight, still flowering profusely.  The arrival of our first frost on 1 November gave me the cue to bring the dahlias back down to ground level and to remove any remaining annuals.  Heavy rain the night before fooled me into thinking bulb planting might be easier but no, the dahlia leaves had well and truly prevented too much water reaching the soil.  I chipped away at making suitable holes and eventually shoe-horned in about 30 bulbs, thereafter retreating indoors with what can only be described as ‘bulb-planting wrist’.

Today I decided to take the easy option and to plant my remaining tulip bulbs in a pot.  Having purchased a pack of orange and purple bulbs shown flowering beautifully together, I was surprised to discover that they were likely to flower at slightly different times.  So I have planted the earlier ones deeper in the hopes that they might all flower together. 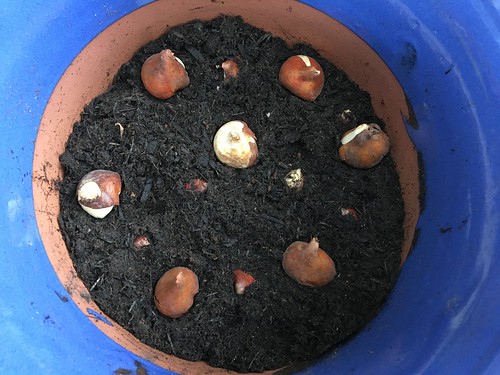 Having prepared my pot, I think had to think about squirrel defences.  Having chopped down my dahlias last weekend and mulched them heavily, today I see that the squirrel has thoughtfully spread my mulch all over the lawn!  I have found that both plant supports and upside down  hanging baskets fulfil a useful anti-squirrel function. 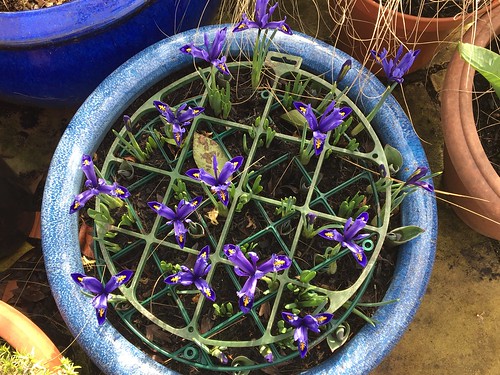 And so, as I sit back and wait for the joys of Spring and bulbs in all their glory, I spare a thought for those professional gardeners and volunteers who bring amazing displays to us every year, such as the one below at Wisley earlier this year, and I’m just grateful that I only had a few packets of bulbs to plant and not a few hundred or thousand! 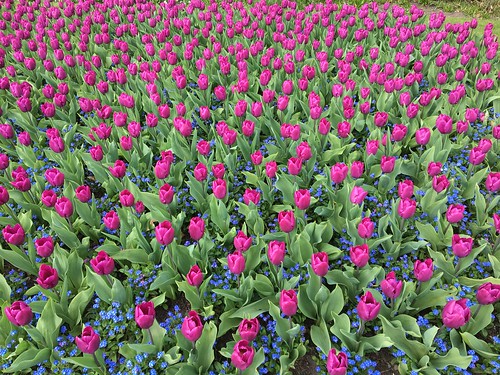