Having had a rather negative few weeks in the garden over July and August (burnt plants, drought etc.), I’ve decided to blog about something much more positive and uplifting this week.  This morning I was taking photographs of numerous bees who were in love with our dahlias.  Dahlia Verrone’s Obsidian to be precise.  A really dark, velvety red dahlia with a deep golden centre, rich with pollen for the bees. 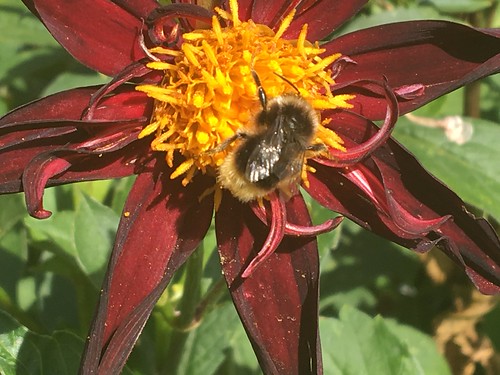 When asked to think about something that is life-sustaining, I suspect most people would cite water.  Bees are not the first thing we think of but, with their ability to pollinate crops, they are absolutely vital to our existence.  I’m sure you don’t need me to tell you that currently our bees are under serious threat.  If it isn’t pesticides, then it’s the varroa mite or the lack of flowering plants that is out to get them.  The EU has now taken action to ban neonicotinoids on outdoor crops which is certainly an important step but, like so many environmental causes, we can all play a small part in trying to save our bees.

Organisations such as Friends of the Earth and the Royal Horticultural Society (RHS) have highlighted just how important our own back gardens are in helping our bees.  The RHS has its ‘Perfect for Pollinators’ plant label to encourage gardeners to purchase plants that are rich in pollen and easy for bees to access.  Even simple things, such as planting single rather than double flowered plants, all play their part.

For the last few years we have made the effort to ensure that any new plants we buy are ‘bee friendly’ and, judging by the number of bees we see in our garden throughout the year, it is having some impact.  We planted the lovely blue’ish purple Echinops (globe-thistle) some years ago but this year we were also tempted to add a grey/silver variety.  Having done so, I began to worry whether it would attract bees as effectively as its more common neighbour.  I need not have feared, I am delighted to say that both blue and silver globes have been covered in bees during their peak flowering season. 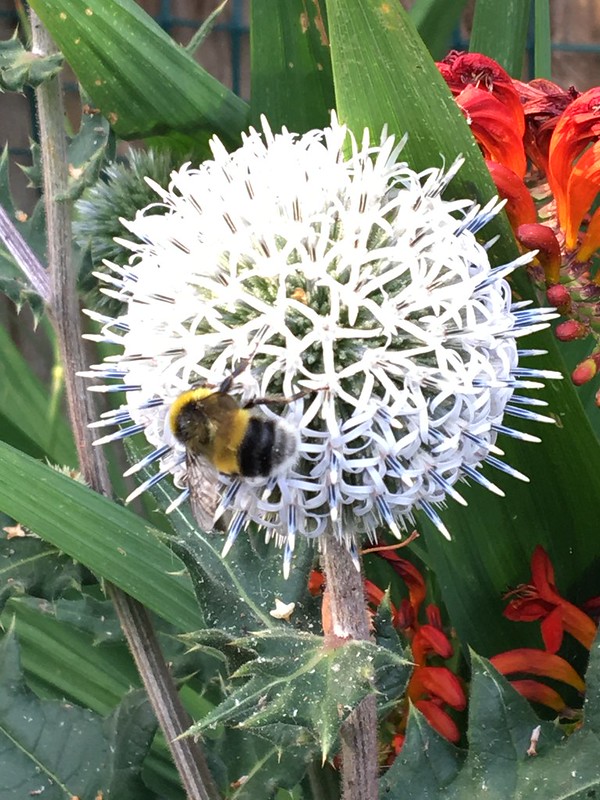 I am also a great fan of Echinacea and have them in pots on the patio and also planted in the border.  They can be quite tender but, having lost a couple in pots which were supposedly over-wintering in the greenhouse one year, I decided to risk two out in the border and I’m pleased to say that they have now returned for about four years on the trot so I can’t help thinking that if they survived the Beast from the East, then we’re OK!  Bees love Echinacea and can often be found clambering around their large central cones. 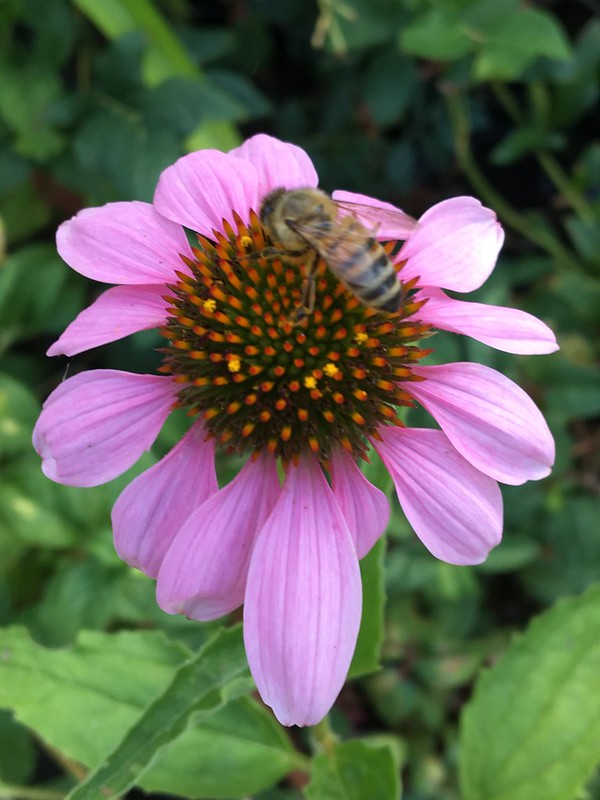 Agapanthus is perhaps the one that surprises me.  We planted these many years ago, well before the bee cause caught our attention but the bees do love them.  They easily disappear up inside the tubular flowers which gradually open one by one across the whole flower-head.  One of the strengths of Agapanthus is this gradual opening.  You can never say that the flower is completely open as they will gradually open each bud one by one. 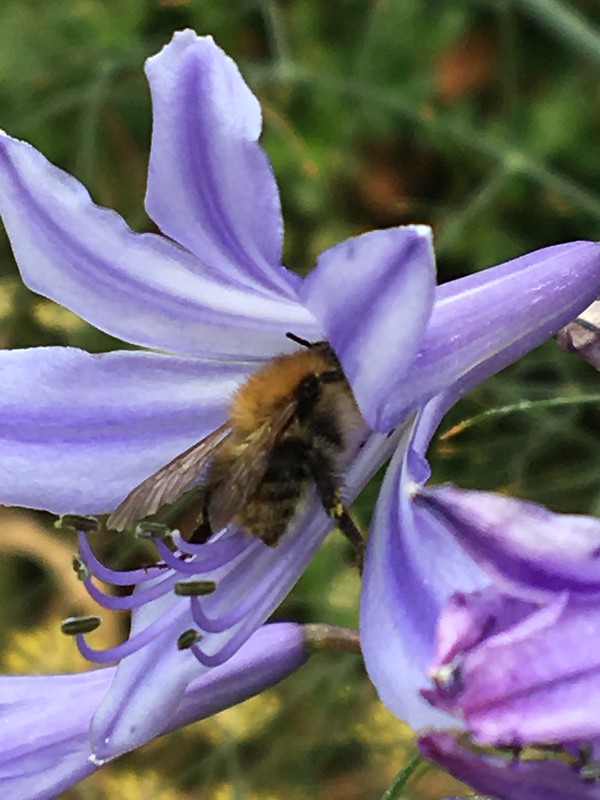 Lavender is the obvious bee-friendly plant and we do have three different varieties in the garden – one French and two English types.  Although the bees are attracted to them, I wouldn’t say that they are the most popular flower in our garden and this year even the lavender has been drought-ridden, hence the lack of photo!  Whilst we’re on the subject of purple plants, I have to mention Eryngium, that very spikey plant.  The bees don’t seem to notice its spikiness and happily dive in where others might fear to tread! 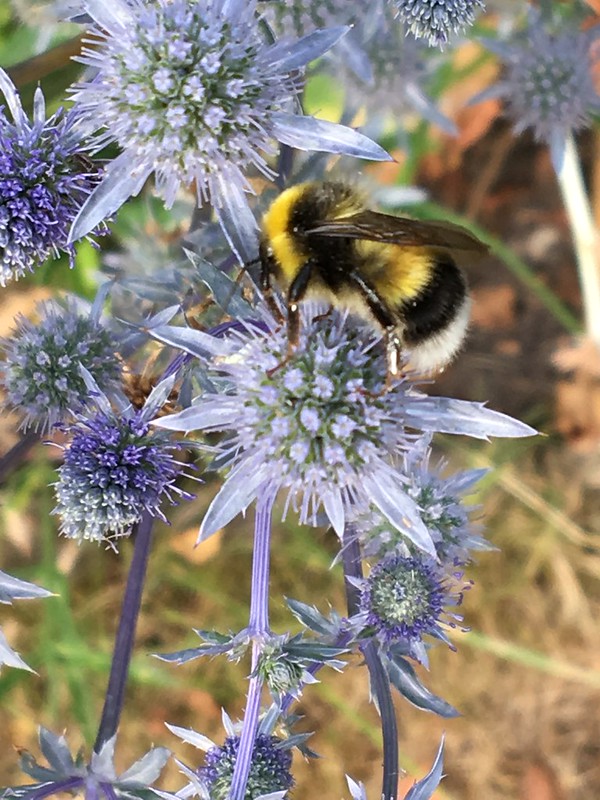 Then of course there is the purple Verbena Bonariensis, with its tall, slender stems topped by clusters of tiny tubular flowers, which is another hit with our buzzing friends.  One year we had clouds of Verbena around the garden but then it seemed to vanish.  We carefully nurtured a few tiny self-sown seedlings and I’m delighted to say that this year we have had several lovely plants.  Unfortunately, when a bee lands on them, they sway around too much for me to be able to capture bee and plant in focus.  So apologies for the lack of bee in the photo below! 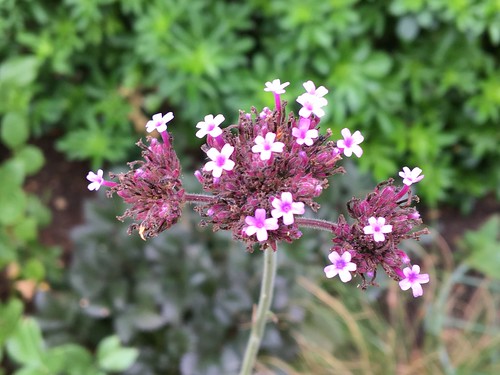 You might be forgiven for thinking that I’m just planting purple plants because I’ve always had a bit of thing about purple!  However, the scientists have shown that purple is the colour that bees can see most clearly.  For someone who likes purple, it’s a great excuse!

Have you taken action to encourage bees outside your back door?

I have a new flower border!  It had existed in my head for ages but finally, in April, we took spade to turf and dug away,  It was quite a plunge to take but I’m glad we decided to dive in as I’m now beginning to see the effect I was hoping for.

I know many garden designers would criticise us for ‘gardening around the edges’ and not dividing the garden into ‘rooms’ or creating weaving pathways, but we are in a densely packed part of south west London so we have always appreciated the sense of openness that we get in our garden.  What we have done on this occasion is to deepen the border on the left-hand side in front of a bank of shrubs, some of which are evergreen (Choisya) but most of which is deciduous Lilac.  Both the Lilac and Choisya are wonderful in Spring when in flower but the rest of the year they can be a bit dull.  So, by removing a swathe of grass from in front of these to shape a new planting area, and by a careful selection of plants, we have attempted to create an area which will be colourful from early to late Summer.  The border is also directly in line of view from the house so having some bright colour to look out onto was also part of our intention.

Having removed the turf (and re-used some of this to patch dead areas of lawn) and then edged it, we set about digging over the rather dry soil and enriching it with our own leaf mould, before deciding exactly what was to be planted there.

In preparation – is it deep enough?

Shopping for high / later summer perennials in early spring is, as we discovered, surprisingly cost effective as smaller versions of the plants are just coming into garden centres and often on deals such as 3 or 4 for £10.00.  Having agreed that this was going to be a hot colour scheme, on one such trip we acquired some golden Heleniums, scarlet Monardas and orange Penstemon.  Before planting out, the plants spent a few days on the patio in the shelter of the house during which time the Heleniums grew and grew!  However, this was nothing compared to the Monardas once planted!  It was like a scene from Jack and the Beanstalk as these plants appeared to put on an inch a day!  I have never grown Monardas before and you may not be that familiar with them but they are the cultivated form of Bergamot which is used to flavour Earl Grey tea.  Their leaves are incredibly aromatic if you rub them between your fingers.  Another common name for Monardas is ‘bee balm’ as they are a very nectar rich, bee friendly plant, so we are looking forward to them contributing to our efforts to ensure that our garden is as bee-friendly as possible.  The Penstemons have proved interesting.  These are Penstemon ‘pinus’ and, as the name suggests, they look just like little pine trees!  They are so unlike the other penstemons we have around the garden.  It felt like their tiny flowers appeared from nowhere but they are providing a glowing orange edge to the border.
A trip to a previously unexplored garden centre with a gardening enthusiast friend led to the acquisition of a deep yellow, repeat flowering rose to provide some central structure to the border.  To our surprise, the Togmeister has already produced a clutch of blooms and more are appearing.  It is a relatively low growing rose which has meant getting down on our knees to check out the scent.

To provide some cooler contrast, I have also planted two Eryngiums.  I do love these spiky plants even if they can be quite prickly to plant!  One of them is the smooth leaved variety whilst the other of the more vicious spikey leaved type.  This latter plant has also shot up to about a metre high in a matter of weeks and is covered in pale flower stars that have deepened and deepened through mid-blue to an intense purple.

And then it was purple!

It’s not all been about adding to the coffers of the garden centres!  The new border has provided a home for some bright and dark dahlias which spent previous summers in pots to protect them from slug attack.  We have decided to brave planting them out for a better show of flower.  The dry spring combined with a very small, judicious use of so-called ‘environmentally friendly’ slug pellets has helped to protect them so far.  A couple of these dahlias were grown from cuttings that I managed to propagate last autumn and to keep alive!  Cuttings are never my strong point and I’m always amazed when occasionally they work.  We have also dotted about a few of our self-seeded Stipa Tenuissima grasses which grow like weeds in our garden.  This particular grass provides a wonderful sense of movement.

Inevitably I am now wondering whether we should have dug the border wider and deeper.  This is partly due to a rather sad occurrence which is going to change the shape of that side of the garden.  It seems that our ornamental flowering Cherry tree is no more.  It produced a few buds in Spring but no real blossom to speak of and is entirely bereft of leaves.  I will probably write more about this at a future date but, the impact of this in relation to our new border, is that we avoided continuing the border under this tree as it would have been too shady.  People often talk about gardening as ‘shaping nature’ but just occasionally nature takes its own course and forces you to have a bit of a rethink.

For now, however, I am very pleased with my view down onto the mix of green and red foliage, illuminated here and there with bright spots of yellow, orange and purple and I am looking forward to a riot of hot colours as July and August approach.