Throughout 2016 we kept promising ourselves that we must do x or y – decorate the hall and stairs and spare bedroom and replace the carpet, decorate the lounge / dining room, replace the leaning garden pergola, renew the fence down the far end and dig a new flower border.  I can’t explain it, but none of this got done – 2016 just seemed to fly by in a flash!  So we approached 2017 with a very long list of things to do both indoors and outside the backdoor and, so far, I’m pleased to say that we are really motoring through that list and, now that Spring is here, the tasks outside the backdoor are either being or are about to be tackled. 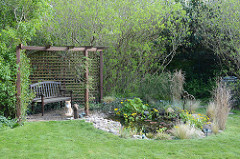 ng point.  The fact that this was on a cold, dark February evening meant that it didn’t really mean much to us at the time.  We may never have thought to build a pergola ourselves but it is an attractive feature and we have consequently planned things around it.  For example, the pond was deliberately sited adjacent to it so that you can sit and look over the water, watching the various insects darting around.  We have also planted a selection of things to scramble over it – a rather lovely white climbing rose and a pink clematis alpina.  The hard lines of the wood have been softened over the years by the lilac growing around it and the ivy entwining itself.

very idyllic but about two years ago the pergola began to lean.  Almost unperceptively at first, but by last autumn it was probably a good thirty-degree angle!  The horizontal wooden struts were also rotten.  The cats love climbing up the pergola but we were beginning to fear for their safety.  Norwegian Forest cats are not lightweights and 6.5 kilos of Bryggen or Roly was beginning to look rather precarious!  So what to do?

As with any project ‘do nothing’ was an option but we quickly ruled that out.  Do away with the pergola altogether was another possibility but that would have left us with a well-established rose with nowhere to climb.  We also quite liked the fact that the cats could climb up it to get a better view or to sunbathe in the corner.  So early in the new year we started exploring the options available to us.

As with so many things these days, you can have just about any size, shape or material you want if you’re prepared to pay for someone to design it for you.  However, once you start looking for relatively simple and cost-effective solutions, the options quickly narrow down.  Whilst there might be hundreds of suppliers of garden pergolas on the internet, many of them offer exactly the same products and, after about an hour of searching, you begin to realise that you are seeing the same thing over and over again.  In the end we decided to be extremely boring and to order exactly the same pergola kit as before.  We agreed that if the new one lasted as long as the old one, we would be perfectly happy and 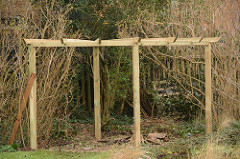 slotting this in would mean relatively little disturbance as far as the plants were concerned.  The only thing we really wanted to change was underfoot – to banish the decking!  Not only was the wooden decking now rotting away but in the winter it can become very slippery.  So we’ve asked the builder to supply some stones to match our other garden paving.  As I write, these are on order so the pergola is sitting there looking very new but not quite finished. 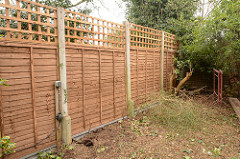 Having got the ball rolling, we’ve also had the fence at the far end replaced.  This separates us from railway land and goodness knows what in the way of wildlife!  We have chosen concrete gravel boards as means of trying to prevent fox damage but we are already taking bets on how long it will be before a fox takes a chunk out of the fence!

From our long ‘to do’ list, this leaves us with ‘dig a new border’ yet to be tackled.  At present we cram all our flowering planting into one section of the garden and beyond that we have a bank of greenery for most of the year.  The choisya flowers in the spring and that sits next to an acuba which provides some bright lime green variation in leaf colour and then a lot of green lilac.  My plan is to dig out in front of this and use it as a backdrop to some late summer colour.  The area is very sunny and I think the hot colours will work here.  It is also in direct view from the house so will have visual impact.  I already have a few plants stashed away in pots ready to plant out here so all we have to do now is start digging before the ground begins to harden. You know how we’ll be spending our Easter bank holiday weekend!