In this Betwixtmas world between Christmas and New Year, what is there to do outside the backdoor?  It’s either frozen solid or sodden, or worse still, both!  We’ve had several mornings where heavy rain has fallen on icy ground, leaving me wondering why people all round the country are paying for the pleasure of ice-skating when they could just take a slide outside!

It is a time, however, for reflection and for planning.  In January Outside the Backdoor celebrates two years as a blog and I’m delighted to say that my WordPress statistics suggest that in 2017 I more than doubled both the views and visitors to the site, which is very rewarding, making it seem all worthwhile. So thank you to everyone who has shown interest and please do keep reading!

So as we look back over 2017, what have been the highlights of the year from Outside the Backdoor?  Well I can’t resist starting with an update on my yucca situation.  Back in October I wrote about Yuccas and me and, at that time the original stalk from which we had taken this year’s cutting, had been unceremoniously dumped behind the garden shed.  It wasn’t our intention to leave it there for long but you know how it is.  Imagine our astonishment when in the depths of November we were having a general tidy around the garden and John spotted that the stem was sprouting!  We brought the pot back indoors and now we have a very healthy set of leaves emerging.

And the yucca story doesn’t stop there.  When we took the previous cutting, possibly in 2014, we used the old stem as part of the fill in under our fence to prevent the foxes tunnelling their way through.  On a foray to the far end of the garden to inspect holly in the hopes of a berry or two for Christmas, John spotted that this stem is also shooting!  What is going on?!  These yuccas are obviously a good deal tougher than one might think!

Another highlight of 2017 was definitely crab apple Laura who regaled us with spectacular blossom and a very generous crop of fruit in the autumn, resulting in many jars of jelly and a good contribution to church sales!

Top of my local highlights list comes my new hot border.  Dug and planted up in the Spring, it provided us with a stunning array of golden yellows, burnt oranges and fiery reds through into the autumn.  In fact, the final flowers of the last rudbedkia only gave into the frosts in early December.  This border was really rewarding and I am only left wondering why we didn’t create it sooner.

In this period of looking backwards and forwards, there are two things I’d highlight from 2017 that I hope will come to pass in 2018.  The first is a definite as it is already sitting outside the backdoor now waiting to be planted properly.  We have acquired two new roses, one of which was inspired by our trip to Denmark earlier in the year and in particular to the spectacular gardens of Egeskov Castle.  The Garden of Life, with its journey through time was exceptionally beautiful and we spent a disproportionate amount of our visit here admiring its planting.  The White Garden was also stunning and both had a rose in common – a creamy white rambler with a gorgeous scent which we had seen flourishing elsewhere in Scandinavia.  Courtesy of Peter Beales’ website, Rosa Helenae has since appeared in my Christmas ‘stocking’ – well, heeled into the veg plot as a temporary measure, to be more precise!

What hasn’t arrived yet, and it is probably only a ‘yet’, is a pot or two of Stipa Gigantea.  A week away in early autumn was spent with a view of this golden grass greeting us every morning.  We saw it in rain, wind and occasionally sunshine and left with a strong sense of ‘must have’.  It is on the new year shopping list!

What better way to end 2017 than devising a shopping list for 2018!  And I’ve not even started browsing the seed catalogues that have dropped onto the door mat over the Christmas break – how timely!  So as we say farewell to 2017, let’s look forward to the garden flourishing in 2018.

Laura is a bit of a star!  Laura is our crab apple tree and, no, we have not named her!  Laura is simply the variety … but it has caused confusion on a number of occasions! 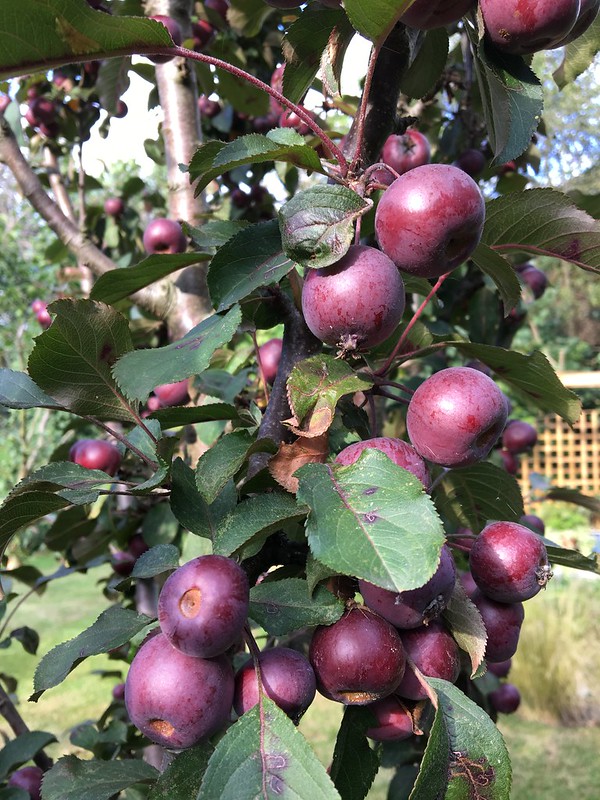 We chose and planted Laura about 8 years ago having been inspired to plant a crab apple tree by a friend’s jelly made from the very popular John Downie crab apple.  We weren’t entirely sure if we wanted to make jelly and we were also concerned that at John Downie could get too big in our garden.  So we decided to research alternative varieties.

We wanted to keep our options open with regards to the jelly making but we also wanted attractive blossom in the spring and ideally autumn colour – not much then!  For jelly making, you need to plant a variety that will produce sensible sized fruits.  You cannot, for example, easily make jelly from a tree that produces crab apples the size of a grape!  When we discovered Laura, she sounded perfect with dark red fruits about the size of a ping-pong ball.  The lovely thing about dark red fruits is that you also get dark red jelly! 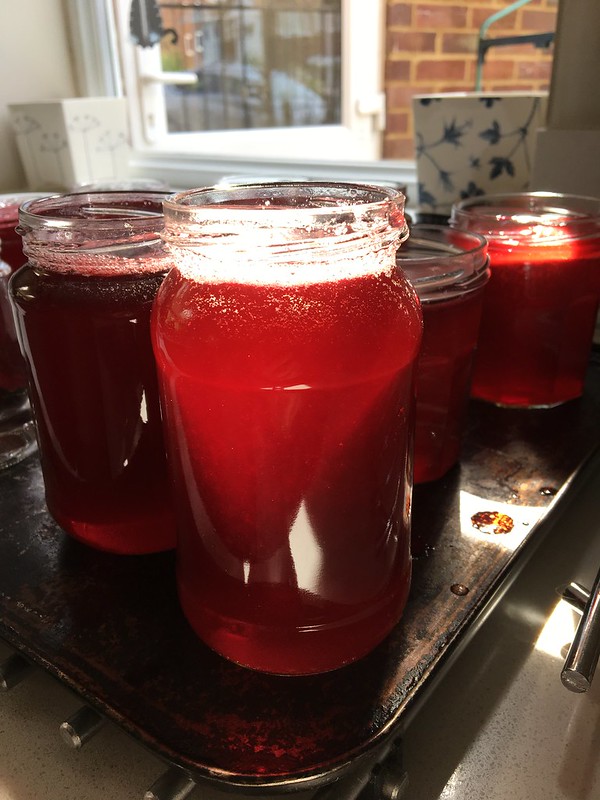 Laura has really flourished and every spring we enjoy her stunning deep pink and white flushed blossom and summer by summer she is getting more and more prolific so that we are literally picking bucket-loads of fruit! 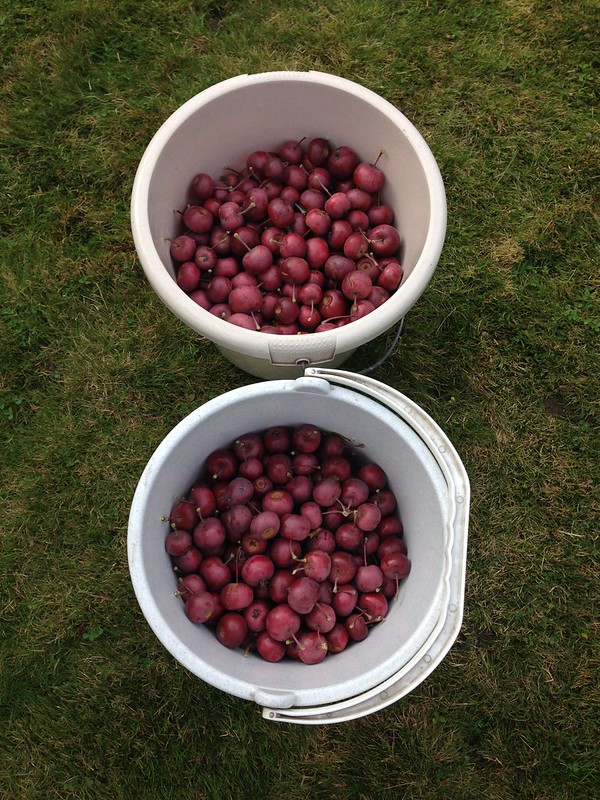 Our jelly is made very traditionally using a recipe from a 1960s Good House Keeping cookery book but also following their hot tip which is to add about 3 cloves to the fruit when cooking.  Any more than that would be overpowering but this just gives a slightly warm note to the overall flavour.  I also highly recommend purchasing a jelly straining kit such as the one from Lakeland.  The first year we tried this, I attempted to set up some Heath-Robinson style affair and, goodness me was it messy!  My other hot tip is, do not forget to put your bowl underneath the strainer before pouring!!  (Yes, that is the voice of experience …)

Of all the trees in our garden, I think it would be fair to say that it is Laura that gives us most pleasure.  We enjoy looking at her, we enjoy eating the end product, and she has been a very easy plant to care for with just a little pruning required to keep her in tip-top shape and to ensure she continues to fruit well.

Should you be inspired to acquire Laura for yourself, she’s not easy to track down but a quick Google search shows that she is currently available from Ken Muir and Pomona Fruits amongst others.