We all have our favourites. May be for you it’s crispy golden roasties served with Sunday lunch or perhaps small, perfectly formed spheres flavoured with a hint of mint. Either way, potatoes are a staple in most people’s diets – do you actually know anyone who doesn’t like them? 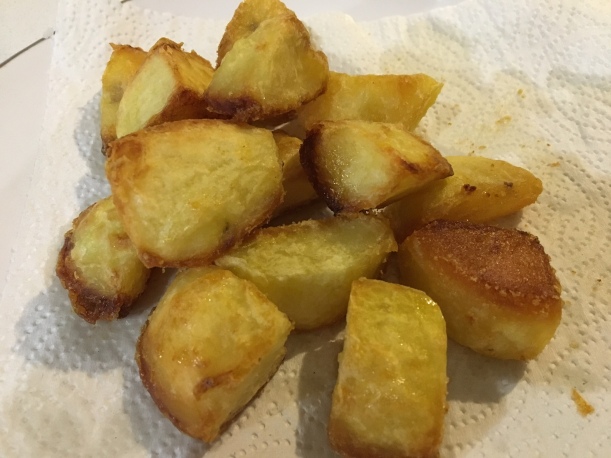 I’m also guessing that I’m not alone in that my very first experience of vegetable growing was potatoes. Some sprouted in the cupboard when I was little and my parents decided it would be fun for me to plant them. Given that they were probably just potatoes bought from the local greengrocer, I seem to recall that they provided us with a surprisingly generous yield (or maybe that’s just my memory?!)

When we dug our initial veg plot, it was with the intention of growing potatoes at the very least, anything else was a bonus. Over the years we’ve had mixed success in terms of both yield and quality. One of our biggest failings has been remembering which variety we’ve bought and whether it worked well enough to try again the following year. And then when we do remember, something holds us up in getting to the garden centre in timely fashion to purchase the same variety and so we end up trying something new again and repeating the cycle – you really would think we would be more organised! We could, of course, order from the huge variety of seed potatoes on offer in all the seed catalogues but, given the size of our veg plot, we only need one bag so it seems a bit over the top! 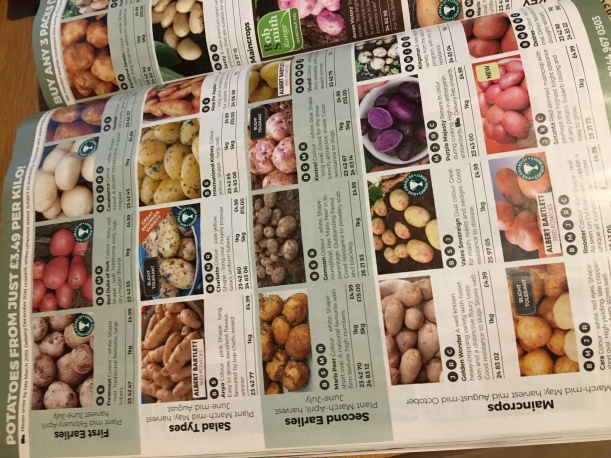 Last year, however, was different. Yes, we were still a bit late to the party in terms of what was left in the garden centre but we walked away with a bag of Foremost which did us proud, yielding a very good quantity of creamy tubers. The Potato Varieties database says that Foremost are relatively resistant to viruses and scab and that was certainly true of ours. On a number of previous occasions, our crop has been distinctly scabby but not last year. In fact we recently found an old cardboard cover from a bag of seed potatoes and laughed at the photo on the front which showed a distinctly scabby potato! Hardly great marketing and we did wonder what had possessed us to buy those.

Being quite a waxy potato, Foremost were also excellent for cooking as they maintained both their shape and flavour. We’ve had reasonable success with Arran Pilot over the years but Charlotte totally fell apart in the pot. We tried leaving the skins on but they would burst out! Our very first potatoes were International Kidney, the variety grown as Jersey Royals. We were very disappointed with the flavour concluding, like the best French wine-makers, that the ‘terroir’, ie. the soil, clearly contributes more to the overall taste than we perhaps give credit for.

Several years ago, in a burst of enthusiasm, we also dallied with Christmas potatoes. We bought a kit which meant we also acquired three planting sacks. The Christmas potatoes were virtually non-existent but the sacks have proved useful. 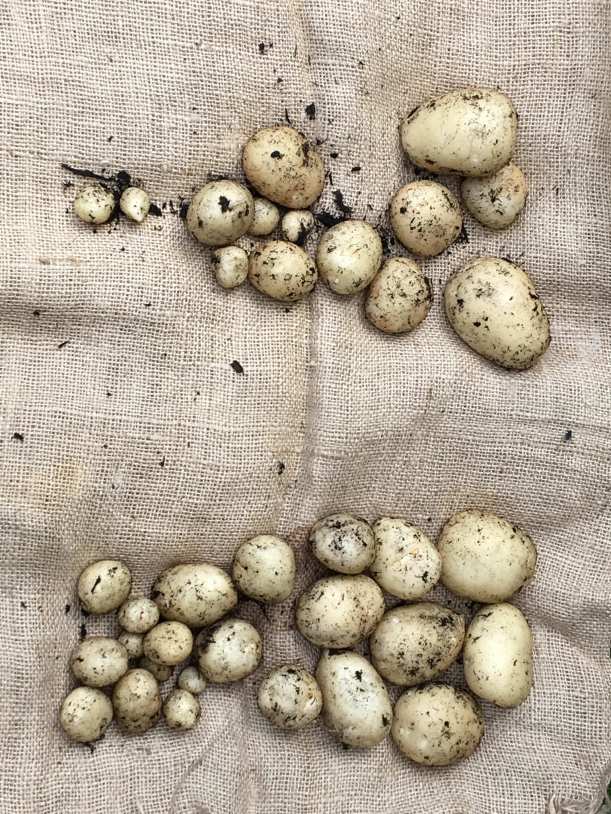 Last spring we had a few too many seed potatoes to fit into our plot and so the remainder found their way into the sacks.  Traditionally potatoes need to be ‘earthed up’.  In other words, as they grow, you gradually draw more and more soil up over the leaves to cover them.  This is supposed to both increase the yield and protect any tubers near the top of the plant from being exposed to daylight which would turn them green and poisonous.  The same principle still applies to growing in bags.  When you first plant the bag, you only half fill it so that you can continue to ‘earth up’.  I don’t know whether this is a good idea of not but last year I didn’t waste good quality fresh compost on this but quite often topped up the bags with any spent compost, for example, from recent seed trays.  So I was simply re-using relatively fresh compost that had just done its job in enabling the seedlings to germinate but which, within a few weeks, would have gone to waste.  Regardless of being a good idea or not, the bags gave us a moderate yield as we expected and again this was of beautifully smooth skinned, clean tubers so it’s certainly something we’ll think about doing again. 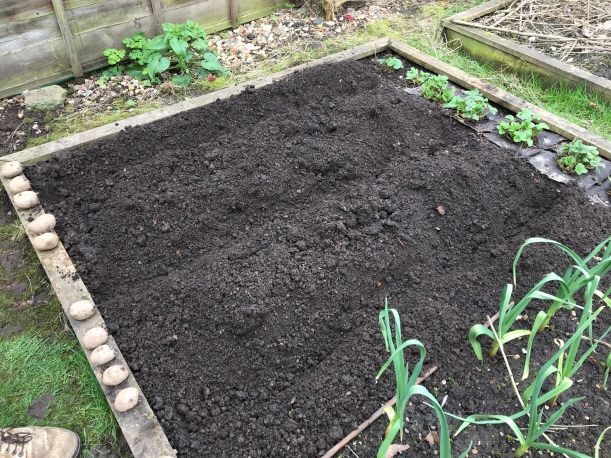 Lined up and ready to plant! (C) Elizabeth Malone

Although we only have two relatively small plots for our veg garden, each measuring approximately 8 feet by 8 feet, we do endeavour to rotate our crops.  Potatoes, however, being relatively large plants do provide us with a challenge and generally we just have to swap them from plot to plot on alternate years.  The size of our plots also limits what we grow so we have focused on either ‘earlies’ or ‘second earlies’, these being the type of potato that we would normally regard as ‘new’ rather than maincrop potatoes which would be left in the ground longer.  Early potatoes are normally ready for harvesting around the end of June so this means that the freed up space can be used for late sowings of beans or other veg whereas if we grew maincrop potatoes, we would be leaving them in the ground for much longer.  It’s all a balance of space and taste! 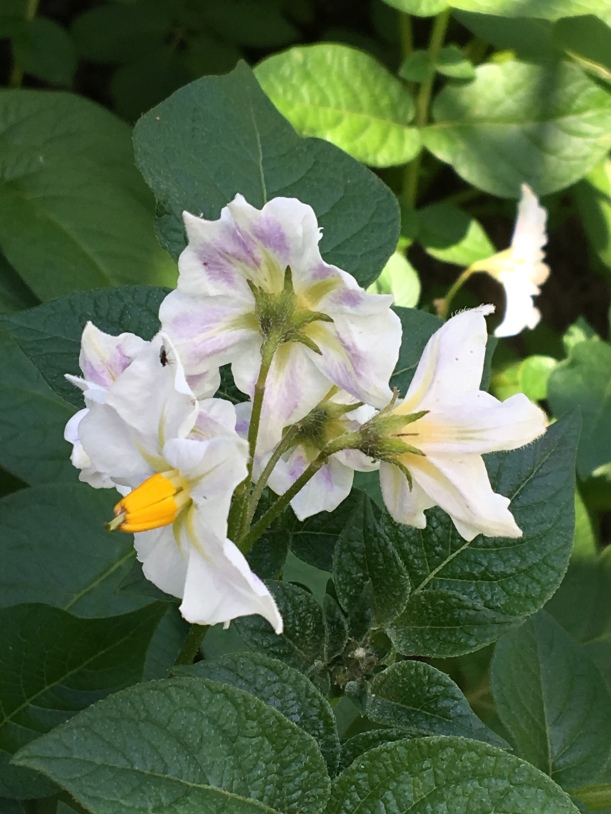 Hopefully by the time you read this, we will have tracked down some Foremost tubers and they will be starting to chit (develop their shoots) out in the shed ready for planting at the end of March.  Apparently my grandfather always insisted on planting his potatoes on Good Friday “when the devil is looking the other way”!  Easter’s a bit late for that this year! 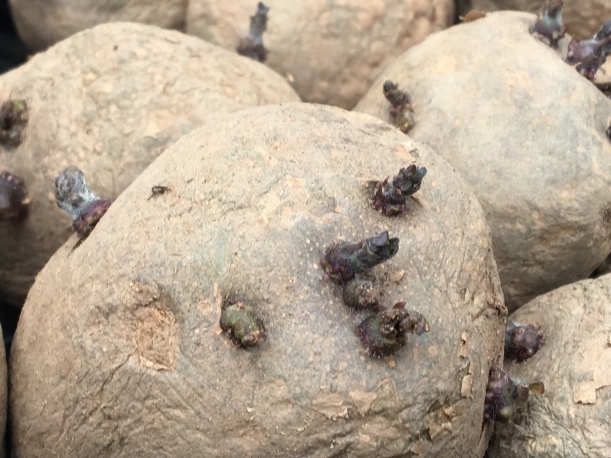 Why is it that one of the hardest jobs of the gardening year is also one of the first?  I’m talking about digging.  Having spent the past few months lifting nothing much heavier than the 25th anniversary edition of Gardeners’ World Magazine, last weekend and today I have been busy confronting the veg plot in the knowledge that, if I want to sow carrots and potatoes, then I need a lovely fertile looking soil and not the rather drab wintry clods of earth that were staring back at me.  So it was out with fork, hoe and rake in an attempt to create a fine tilth.

It never fails to amaze me how many stones I churn up during this process.  When we dug these beds originally, we removed a very large number of stones but, year after  year, more appear!  With carrots in mind, stones are a nuisance or a source of amusement, depending on your point of view.  Stones are often the reason for the hilarious shaped veg that appear which may or may not be much use when it comes to cooking.

Being Good Friday, it was also important to get our potaotes planted.  Family tradition (well no one else I’ve spoken to has ever heard of this!), possibly started by my grandfather, is that you plant your potatoes on Good Friday “when the devil is looking elsewhere”.  This is supposed guarantee a good crop.  So having dug, hoed and raked, we collected the beautifully purple chitted Arran Pilot tubers from the shed and popped them into the soil.

Of course there’s not much to show for our efforts at this stage other than our rather strange arrangement of sticks.  These are cat defences.  There’s nothing like a lovely bit of soil preparation for our cats to presume that we are just improving their toilet facilities! 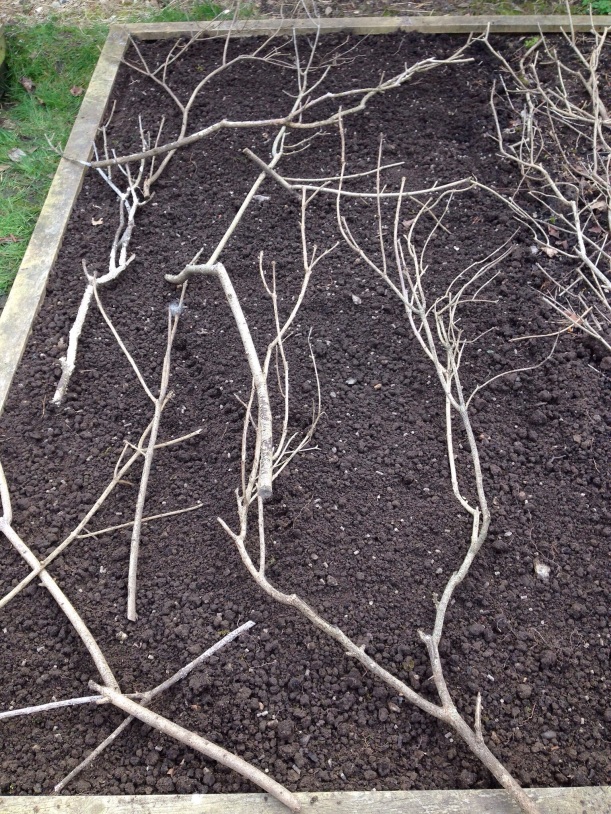 It’s hard to put my finger on it but there’s always a point in early February that seems to switch on my gardening brain.  Whilst I will be the first to put my hand up in shame and admit to being a bit of a fair weather gardener, it’s not just that the short dark days of December and January offer little encouragement to go outside, there’s something inexplicable that triggers in February that says come on, it’s time to start planning, buying, putting ideas into action.

This year it hit me yesterday morning.  I opened up the February edition of Gardeners’ World Magazine and saw trigger words such as ‘sow’, ‘seed’ and ‘prune’, and before I knew it, I had 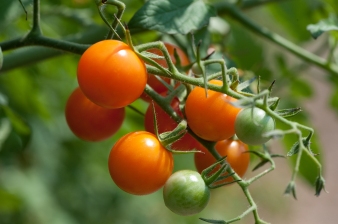 a giant list for the garden centre today!  Not that it was the most exciting list, principally consisting of large bags of stuff – compost (multi-purpose and ericaceous) and manure, plus tubs of poultry manure.  However, there was also the promise of things to come with a bag full of seed potatoes (Arran Pilot) ready to chit and a sachet of Sungold tomato seed to be sown later this month. l discovered Sungold by chance some years’ ago before they became every chef’s favourite.  Somehow they manage a unique depth of flavour that balances both sweetness and sharpness, making them the perfect tomato in my opinion.

As soon as I was home it as out with the rose food and the manure to get our roses off to the best start for this year.  Then it was on to pruning a giant overgrown shrub.  This would have been a lot easier without the gale force winds which made the bush a constantly moving target!  Meanwhile John could be seen attacking the buddleias at the far end of the garden, reducing their twenty foot high branches down to two foot high trunks.  Now they are ready to go racing skywards once again.