Approximately every five years some of the larger trees in our garden require something more drastic than a light prune and so we summon the tree surgeons to come and wield the chain-saws.  Back in November, we did the same again but this year, sadly, we also had to ask their advice on dealing with our dead flowering cherry.

When we moved into our house our timing was perfect.  It was late April and the flowering cherry was in full bloom.  We were just in time to see it at its best before the pink snow-cloud began.  Funnily enough, we had to get it pruned that summer – at the same time as having the boiler replaced, if I recall correctly!  It was then that we learnt that ornamental flowering cherries are often quite short-lived – around fifty years on average, we read.  From that moment on, we felt nervous.  Our house was built in 1955 but when was the tree planted?  Given its look of maturity, we guessed not long after that which made it around fifty years old.  Still, for the next fourteen years or so, it flourished. 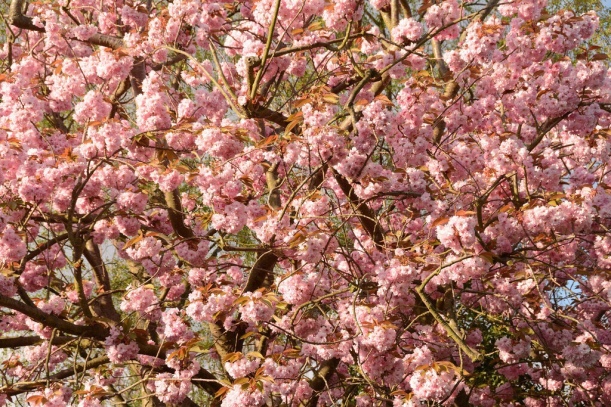 Then in November 2013 it was time for the tree pruning round again.  The cherry was taken back to its previous pruning points by the same company who had, by now, pruned it at least twice before.  After this major prune, the trees always look a bit sparse but by the autumn they have usually filled out again.  This time the cherry remained a bit sparse all year.  We didn’t think a great deal of it at the time but, in retrospect, the following summer of 2015, it didn’t really improve.  It flowered in the spring as usual but it wasn’t its usual voluminous self.  Perhaps it will improve next year, we said to ourselves – but it didn’t.  Again we had lovely pink blossom followed by glossy coppery leaves but somehow it just didn’t seem to be returning to the same fullness that we had become used to.  Mostly we put it down the combination of dry Januaries and then peculiarly grey and uninspiring summers.

When spring 2017 dawned, I watched carefully.  There were buds, but not many.  John said it was still a bit early.  This was true and, what I’d learnt about cherry blossom over the years, was that it goes from nought to sixty very rapidly in flowering terms!  A small bud one week is very quickly a mass of blossom only about ten days later.  Then the cherry tree over the road started coming into flower.  There was still no sign of flower on ours.  It’ll catch up, said John.  It didn’t.  It soon became clear that every other flowering cherry in the neighbourhood was covered in pink or, worse still, starting to get past its flowering best and yet ours stood there, stationary, with just a few chunky buds doing nothing.  It was a sad sight.

We decided to take action – possibly rather late in retrospect.  As a paid up member of the Royal Horticultural Society, I decided that now was the time to consult their plant help line.  They responded pretty promptly with advice on scraping back the bark in different places to see if the branches looked brown and dead under the surface.  They didn’t.  So we followed their further advice and sent in samples from different areas of the tree roots.  Sadly I received the following response:

“All three roots in your sample are healthy, with plenty of fine feeder roots present, so from this sample at least it does not appear as if a root disease is involved in the problem. However, the complete lack of leaves on a large tree like this, coupled with the speed of the decline that you describe, seems somewhat dramatic to me for the effects of drought and age – if these were solely responsible I would have expected a more steady decline. Having said that, fifty years is certainly a good age for this type of tree!  I think that if the tree is still not showing any signs of producing new leaves then its condition can probably be regarded as terminal.”

I don’t recommend spending a summer with a large dead tree in your garden – it is a depressing sight!  We had also just created the new hot border nearby which, if we had known the tree was going to die, we would have dug a different shape!  And yet when the tree surgeons came to quote, I really couldn’t bring myself to instruct them to remove it completely.  Instead I asked them to create a framework to support climbing plants, provided they felt the trunk was sufficiently robust to do so.  This they did and so now we have a new opportunity.

Sitting heeled into our currently empty veg plot is a new rambling rose – Rosa Helenae.  Its flowers will be small, white, clustered and scented and we hope that it will ramble its way up the old cherry trunk.  This will be a our first venture into owning a ‘rambling’ as against ‘climbing’ rose.  I just hope we’re prepared for the thorns!  I grew up with a rambling rose and still recall my mother cursing pruning it each year and her delight when the opportunity arose to remove it – and she was a great rose lover!!  I guess sometimes the saying of ‘right plant, right place’ also needs to apply to home and owner and getting snagged on thorns every time you walk down the garden isn’t much fun!

So as the 2018 gardening year commences, we will plant our new rose and we’ll reconfigure the hot border and hope to draw our eyes away from the dead branches behind.

It’s hard to put my finger on it but there’s always a point in early February that seems to switch on my gardening brain.  Whilst I will be the first to put my hand up in shame and admit to being a bit of a fair weather gardener, it’s not just that the short dark days of December and January offer little encouragement to go outside, there’s something inexplicable that triggers in February that says come on, it’s time to start planning, buying, putting ideas into action.

This year it hit me yesterday morning.  I opened up the February edition of Gardeners’ World Magazine and saw trigger words such as ‘sow’, ‘seed’ and ‘prune’, and before I knew it, I had

a giant list for the garden centre today!  Not that it was the most exciting list, principally consisting of large bags of stuff – compost (multi-purpose and ericaceous) and manure, plus tubs of poultry manure.  However, there was also the promise of things to come with a bag full of seed potatoes (Arran Pilot) ready to chit and a sachet of Sungold tomato seed to be sown later this month. l discovered Sungold by chance some years’ ago before they became every chef’s favourite.  Somehow they manage a unique depth of flavour that balances both sweetness and sharpness, making them the perfect tomato in my opinion.

As soon as I was home it as out with the rose food and the manure to get our roses off to the best start for this year.  Then it was on to pruning a giant overgrown shrub.  This would have been a lot easier without the gale force winds which made the bush a constantly moving target!  Meanwhile John could be seen attacking the buddleias at the far end of the garden, reducing their twenty foot high branches down to two foot high trunks.  Now they are ready to go racing skywards once again.