Those of you with long memories may recall my initial shock and surprise when I found my first newt in our pond!  In fairness it wasn’t actually in the pond at the time as I had inadvertently pulled it out onto the ‘beach’ at the side along with some weed.  Fortunately for the newt I had been paying attention to the literature on pond-life and knew not to just bin any weed but to give it time for creatures to crawl out and work their way back to the water.  The newt emerged upside down, showing an orange belly and wriggling legs, making it look distinctly un-newt-like and causing me to wonder what monster I had found! 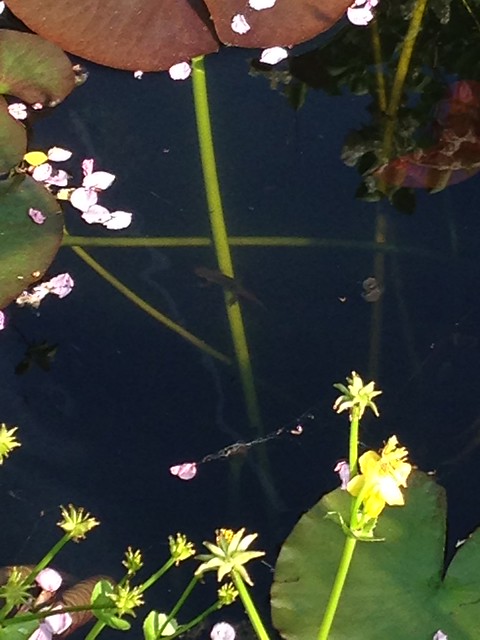 Since then our newts have flourished and to our amazement we recently counted as many as eight all swimming around together.  They can be quite difficult to spot but the spring sunshine tends to be at an angle that enables you to see into the water quite clearly.  Newts have an interesting way of lazing around.  Sometimes you see them sleeping along a waterlily stem but most of the time they just appear to hang in suspended animation in the water (look carefully at the photo!).  The occasional flip of their front legs enables them to glide to the surface to catch unsuspecting insects and the little ripple of water this causes is what usually catches our attention and alerts us to their presence in the first place.

The presence of eight (or possibly more) newts probably explains why we appear to have very few tadpoles this spring.  As in previous years a good amount of frogspawn was laid and after about two weeks became a writhing mass of little ‘comma’ like creatures which eventually become the tadpoles.  Then they vanished.  This happened last year so we weren’t too worried as last year’s tadpoles suddenly reappeared a few weeks later and there were hundreds of them.  That hasn’t happened this year and there are relatively few swimming around.  Tadpoles are top of the menu as far as newts are concerned so no doubt of newt population has been feasting well.  Newts, it seems, are also partial to the odd water snail and we have lots of those so it’s hardly surprising that our newts appear to enjoy living in our pond.  However, newts also spend a good deal of time on land when they eat slugs, although judging by the number of those currently in the garden, not enough!

So if newts eat snails, the other morning I was prompted to wonder what eats newts?  This question was prompted by the sight of something long and slippery sliding into the pond.  Our next door neighbour has often come out with tails of finding snakes in the garden.  He could be right and there may well be grass snakes but, preferring not to think of our garden as a nest of vipers, I decided that what I’d seen was more likely to be a slow worm.  Finna, our female cat, spotted the sliding worm and sat staring at the water for a good while longer, hoping to catch a further glimpse.  I have since discovered that cats are one of the main predators of slow worms.  I am now dreading a slow worm turning up in the house!  So could it have been a slow worm that I saw?  I took a look at a few wildlife website to find out what conditions they favour.  They like railway lines – tick – we back onto one of those.  They like compost heaps – tick – the side of the pond where I think I saw the slow worm is closest to our compost bin.  They also like wood piles – tick – we’ve got one of those nearby too.  I also checked that they can be good swimmers but prefer not to live in water.  Finally, the good news is that they don’t feed on newts but they do feed on slugs!  So please, slow worm, get to work on our slug population!

Is it me, or has it been an exceptionally good year for bluebells?  We had more clusters around the garden than usual and out on our recent travels, it felt like the bluebells travelled with us – slightly past their best in the South, amazing vibrant carpets of blue in the Midlands, and just emerging in Scotland!

Are they English or Scottish?  Was a question I was asked recently about our own garden bluebells and, with an air of disappointment, I was forced to admit that most of them are probably Spanish!  The Spanish bluebell has been invading the South East for a good many years now and so I fear our proliferation is in this direction rather than in the deeper, richer coloured and more elegant English variety. 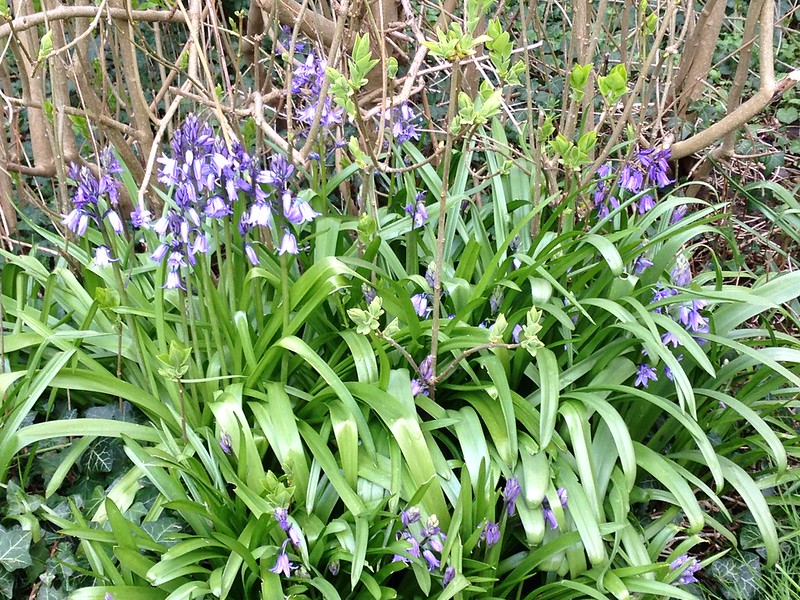 In fairness, when I look at the cluster in this photo, I’m heartened to see that there may be a mix of English and Spanish.  The Spanish variety are paler and more upright whereas the English are darker and have a tendency to arch, with the flowers displayed on one side of the stem only.  Looking at that stem on the far right of the photo, that looks more English to me!

The only downside to this excess of bells is that they now need deadheading!  I took a good bag full of stems down to the compost bin one warm afternoon this week.

And whilst the Spanish may be a troublesome invader, I have to admit that I do still quite like them.  After all, who can resist the depth of blue in this clump?  True blue flowers are few and far between and these looked stunning complimented by pink blossom and purple tulips and have even given me an idea for planting next year – so watch this space!